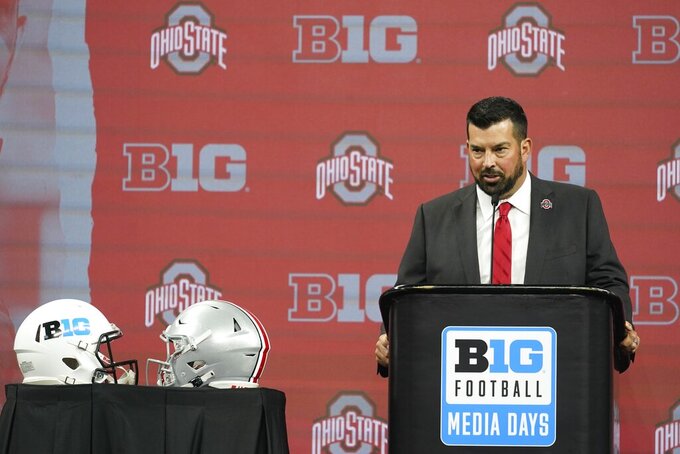 INDIANAPOLIS (AP) — Kevin Warren introduced Ohio State's Ryan Day at Big Ten media day, the final coach to take the stage at the two-day event, and the two men exchanged a hearty hug and smiles before posing for a photo.

“I want to congratulate Commissioner Warren on a great couple of months leading this conference into the future,” Day said Wednesday as he began his 15 minutes at the podium to talk about the Buckeyes.

A little less than two years since Warren was pilloried inside and out of the Big Ten for the conference's decision to postpone the fall football season because of the pandemic, the 58-year-old is now sitting atop an expanding empire that has never been more powerful.

Earlier this month the Big Ten announced Southern California and UCLA will join the conference in 2024. In the coming weeks, Warren and the Big Ten are expected to unveil the conference's new media rights deal that could be worth $1 billion annually.

To put it in sports terms, Warren's comeback has been more impressive than Ohio State erasing a 14-point deficit to beat Utah in the Rose Bowl.

Given the opportunity to spike the ball at Lucas Oil Stadium this week and revel in the redemption of his reputation, Warren took a pass.

“The moment that you use any energy to distract from the energy that you need to accomplish your goal, it can have negative ramifications on it,” Warren told the AP. “So I have to stay in the moment.”

Warren's hiring in 2019 to replace Jim Delany was a surprise inside the industry. The lawyer and former longtime executive with the Minnesota Vikings with no experience working in college sports was an unorthodox choice at a time when there was so much change on the horizon.

Then the pandemic hit and any chance Warren had to grow into the job went away. He immediately needed to shift into managing an unprecedented crisis while still getting to know the university leaders he works for and the athletic directors he works with.

On Aug. 10, 2020, the Big Ten announced it would not play football in the fall. The decision was made on majority vote by the league's presidents and chancellors, but Warren became the target for critics. None louder than in Columbus, Ohio, home of the Buckeyes.

Infuriated fans, disgruntled parents of players and frustrated coaches and athletic directors who disagreed with the decision questioned Warren's fitness for the job.

And some people did much worse.

Warren said he received death threats that forced him to hire security and change the way he traveled to ensure his family would be safe.

Warren said he looks back on that decision without regrets, but also concedes some of the criticism of his leadership was valid.

“I think he’s really learned that working across the board with the presidents and the chancellors and the athletic directors and faculty athletic reps, how vitally important that is in this business,” Maryland athletic director Damon Evans said.

Eventually, the conference reversed its decision in the fall of 2020 and played an abbreviated season that put Ohio State in the national championship game.

“This a tough job to start with," said former Wisconsin coach and athletic director Barry Alvarez, who now works in an advisory role to Warren on Big Ten football. "To get through that, I don’t care who would have been there, it would have been a difficult situation. I just think Kevin’s a grinder.”

As pandemic problems receded, Warren was able to turn his attention to the business of putting his stamp on the Big Ten.

No business for a college sports conference is bigger than its media rights contract.

While the television deal was always set up to be a win for Warren, the addition of USC and UCLA from the Pac-12 to the Big Ten was a lighting strike few saw coming. One that will reshape the landscape of college sports — Warren's legacy.

But just as Warren was not solely responsible for the 2020 postponement, adding a West Coast wing of the Big Ten was not one man's vision and execution.

The realignment will also be a boon to Fox, already the Big Ten's main television partner and expected to gain a greater stake in the conference in the upcoming deal.

Warren said the people he respects as leaders, from Rev. Martin Luther King to CEOs such as Richard Davis and Shelly Ibach, hold a common belief that he tries to live by.

“It shows that we're a unified front,” Warren said. “And I’ll admit, I didn’t have that.”

“I think that the thing that I’m probably most pleased about is that I think people are starting to really understand that when the Big Ten is unified, we are a dominant, powerful force in college athletics. And we’re a powerful and dominant force in all of athletics.”

Follow Ralph D. Russo at https://twitter.com/ralphDrussoAP and listen at http://www.appodcasts.com