Corrigan looks to build on NC State's success as next AD 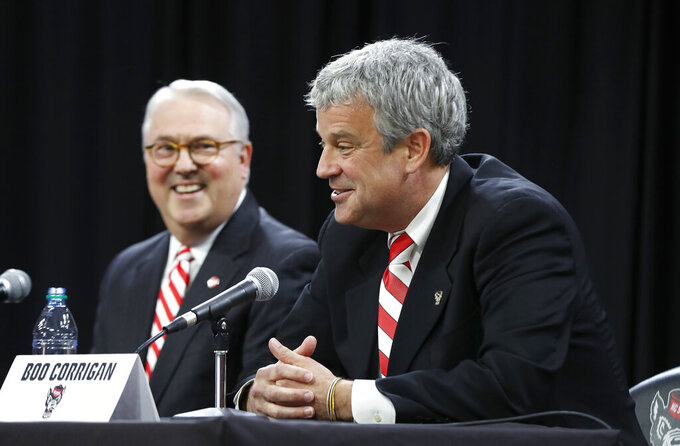 The school held a news conference Thursday morning to introduce the Army athletic director as its next AD. Corrigan will start work May 1 to replace Debbie Yow, whose contract expires in July after nine seasons in charge.

Corrigan certainly has familiarity with the job through his ties to the Atlantic Coast Conference. He has worked in athletic departments at fellow league schools Duke and Florida State, and is the son of former ACC commissioner Gene Corrigan.

"We were interested as soon as Debbie announced that she was going to retire in a year," Corrigan said afterward. "It was one of those things (where) we weren't looking to go any place. It needed to be going to some place."

He'll inherit a 23-sport program in a better overall state than the one Yow took over in 2010, though there is a potential problem looming: the men's basketball program is entangled into the federal investigation into hundreds of thousands of dollars in alleged bribes and kickbacks designed to influence recruits on choosing a school, agent or apparel company. It has touched schools such as Kansas, Louisville, Miami and Maryland, among others.

In N.C. State's case, the questions are tied to the recruitment of former one-and-done star Dennis Smith Jr. A rewritten federal indictment last April alleged that a former Adidas representative arranged $40,000 for the parent of an athlete committed to the school — and that an unnamed Wolfpack coach was involved in delivering the money. And in October, a government witness testified that he delivered the money to former assistant coach Orlando Early and that it was intended for Smith's family.

The case has already led to convictions against an Adidas executive and two other insiders, as well as guilty pleas by three former college basketball assistant coaches. N.C. State has said it is cooperating with investigators and it's unclear if the program will face NCAA trouble. The staff of current coach Kevin Keatts, who took over in March 2017, is not linked to the case.

Chancellor Randy Woodson said he and Corrigan had "careful and deep conversations" about the case and that "he knows essentially everything I know at this point."

"We've been cooperative with anybody, with all of the investigators," Woodson said. "And so this is going to get done at some point. Everybody that I talked to, as you would expect: they all asked questions about it. And I told them everything I know and there was no discomfort there."

That was true for Corrigan, too.

"But if you've got from the highest level the kind of buy-in and support that, we're going to handle it, that we're going to face it and deal with whatever comes — that's what I was looking for more than anything else."

By last summer, the school — bolstered through steady gains in numerous non-revenue sports — posted its highest finish at No. 15 for the 2017-18 season. The school also has consecutive nine-win seasons in football, a men's basketball program in the AP Top 25 and a women's basketball program ranked No. 7 as the last unbeaten team in men's or women's Division I basketball.