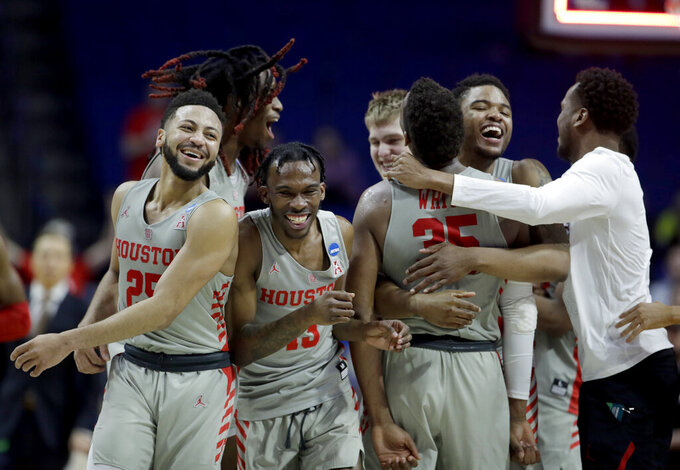 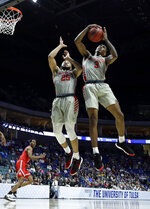 HOUSTON (AP) — When the Houston Cougars were last in the Sweet 16 Hakeem Olajuwon starred and coach Guy V. Lewis stalked the sideline in his trademark plaid jackets.

Thirty-five years later a new generation of Cougars led by Houston native Galen Robinson Jr., Armoni Brooks and Corey Davis Jr. finally have the team in the round of 16 again after decades of struggles.

"It's wonderful to see the university back on the big stage," Olajuwon told The Associated Press. "It's been a long time."

And while these Cougars are proud to have revived the program, they aren't done yet and are focused on doing something those storied Phi Slama Jama teams couldn't do: win the team's first national championship.

"It's definitely priceless because it's always great to be associated with greatness," Robinson said. "That 83-84 team, that was a great team ... but we definitely want to make a story of our own and are trying to do something that's never been done before."

Houston reached the round of 16 by beating Ohio State 74-59 on Sunday night for its 33rd victory of the season, which outdid the 1983-84 team for most wins in school history. The third-seeded Cougars (33-3) will play second-seeded Kentucky on Friday night in Kansas City, Missouri.

Those Phi Slama Jama teams in the 1980s, which also featured Hall of Famer Clyde Drexler and NBA first-round pick Michael Young, reached the Final Four in three straight seasons from 1982-1984, but never won it all. They reached the championship game in those last two seasons, but lost to North Carolina State in 1983 and Georgetown in 1984.

The Cougars try not to look back too much. But it's easy to see that they take great pride in helping the team do something that was last done by Olajuwon, the first overall pick in the 1984 draft, who was inducted into the Hall of Fame in 2008 after an 18-year NBA career.

Bring up The Dream to Armoni Brooks, a junior who ranks second on the team in scoring, and he can't help but smile.

"It's honestly surreal," he said. "He was such a great player here and in the NBA. So being able to even see our names around his name just makes us hungry, but it also humbles us to let us know we're in a great spot right now."

Olajuwon loves that the current players appreciate his legacy and he raved about the team.

"I love watching them play," he said. "They work hard. They play very, very tight defense. They're confident. They play fantastic basketball."

The Cougars are also reveling in the buzz they've created around campus and throughout the city of Houston. Brooks said people rarely bothered him when he first arrived on campus, but now the junior can't go anywhere without fans offering him high-fives or words of encouragement.

"It's non-stop — on Instagram, everywhere," Brooks said. "You're getting love everywhere. And it's just great to be able to put our school back onto national prominence in basketball."

Following the unprecedented success in the early 1980s, there were plenty of lean years. The Cougars only reached the NCAA Tournament three times from 1985-2009. The program had fallen on such hard times that the thought of top players in Houston even considering signing with the Cougars was laughable.

Robinson, who is a senior, spent his childhood playing pickup games at a recreation center on the school's campus. He remembers what the older kids would tell him about the school in those days.

"Crazy thing is, when I used to go play at the rec, they used to all tell me: 'never come here,'" he said. "Thank God I didn't listen to them."

Robinson was one of the first players Kelvin Sampson courted when he took over a team which hadn't been to the tournament since 2010 for the 2014-15 season. He developed into the undisputed leader of this team and set a school record by playing in his 135th career game in the win over Ohio State.

Olajuwon admitted it was difficult to see the once proud program become irrelevant in the years after his departure. But even when many wondered if the Cougars would ever be contenders again, he had faith that they'd regain national prominence.

Olajuwon has a close relationship with Sampson and lauded the 63-year-old coach for his work at the school.

"When you win it's easier to recruit, but when you lose nobody wants to come," he said. "So to turn it around, you have to give coach Sampson a lot credit. He's done an incredible job."

The Cougars won just 13 games in Sampson's first season, but the following year, which was Robinson's first, they won 22 games for the school's most victories since 2008. They finished with 21 wins in 2017 before taking the next step last season, going 27-8 and making their first tournament appearance in eight years.

They came one win short of the Sweet Sixteen last season thanks to a buzzer-beating 3-pointer by Michigan, setting the stage for this year's success.

For Sampson, who vowed to turn this program around from the day he was hired, it's difficult to appreciate the historical significance of what this team has done. He says that kind of reflection should be reserved for when the season's done. But he did take a minute to appreciate how far the Cougars have come in short time.

"I know we've had a magical year. I know that," Sampson said. "To be sitting on this side of the fence and be coaching a team that's won 33 games, that doesn't happen every year."

And Olajuwon will be watching this weekend, hoping the Cougars can add to that win total to move on and try and accomplish the one thing he and his teammates couldn't.

"If they can do it that would just complete the history of the university," he said of the possibility of Houston winning the national title. "That would be fantastic. We're all rooting for them."