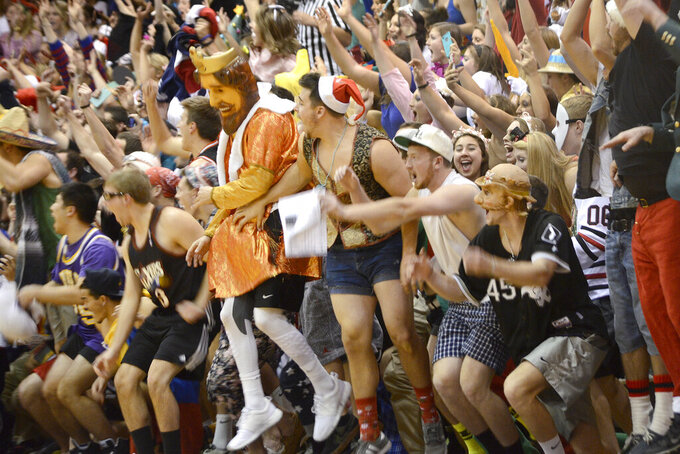 FILE - In this Dec. 5, 2014, file photo, Taylor University students erupt with a roar as the Trojans score their 10th point against Kentucky Christian in the 18th annual Silent Night basketball game in Upland, Ind. Taylor's fans, who dress up in costumes or pajamas, sat in silence until the Trojans' score reaches ten. The game has been played each year on the Friday before finals week for decades, but the coronavirus pandemic forced the liberal arts university to call it off this year. (Jeff Morehead/The Chronicle-Tribune via AP) 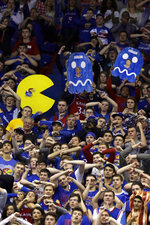 There is a tradition at Taylor University, a small NAIA school in Indiana, where the entire crowd sits in complete silence until the men’s basketball team scores its 10th point of the game and sets off a wild celebration.

Thanks to the scourge of COVID-19, there will be no Silent Night game this year. Only silence.

The game has been played on the Friday before finals week for decades, but the pandemic forced the university to call it off this year. The standing room-only crowd, including hundreds of students dressed in their pajamas, will stay at home, unable to sing the old Christmas standard of the same name at the end of the game.

As the college basketball season begins this week, there is a disheartening absence of tradition. The population of Krzyzewskiville at Duke will be zero, the Oakland Zoo at Pittsburgh a little more tame. The Orange Crush at Illinois will be less intimidating and the ghost-like sound of “Rock Chalk Jayhawk” at Kansas will be merely echoes from thousands of previous wins.

“Without doubt, this is a difficult announcement for us to deliver to our Taylor community," interim president Paige Comstock Cunningham said in announcing the cancellation of Silent Night, "but the health of each student, faculty and staff member, as well as that of our families, must be our primary objective.”

Indeed, very little has been normal since sports returned from a long shutdown with the NBA and NHL playoffs held in largely fanless bubbles and Major League Baseball played before oceans of empty seats. The NFL season brought small numbers of fans, as did the return of college football in some locations, but the sense of electricity has still been missing.

That will be even more pronounced for college hoops, where fans packed into arenas ranging from the tiny (G.B. Hodge Center at South Carolina-Upstate, capacity 878) to the massive (Carrier Dome at Syracuse, capacity 35,446) are close enough to the action that they can see and smell the sweat dripping from the players.

Fans in such close proximity create massive homecourt advantages at places such as Allen Fieldhouse (Kansas) and turn venues such as Cameron Indoor Stadium (Duke) into nightmares for opposing teams.

“I’m starting my 41st year here, so I’ve benefited greatly from having that sixth man to create one of the best environments in sport, not just in basketball,” Duke coach Mike Krzyzewski said. “We'll see. After we play a couple of games, I’ll let you know how good or how bad it is. I will tell you this, though: I know overall it’s an advantage for us.”

Just about every school has unique traditions that have been quarantined.

Michigan State is only allowing friends and families of players and coaches, meaning the raucous Izzone section will be on hiatus. The handful of people allowed for Indiana games won't be singing the “William Tell Overture” at the under-8 timeout of the second half with the same gusto. Chants of “I Believe” at Utah State, “O-H-I-O” at Ohio State and “Boomer Sooner” at Oklahoma will feel very different when they are merely audio recordings.

Fans are locked out of the Palestra, the old Philadelphia gym that has served as the Big 5 home for 65 years. Saint Joseph’s, Villanova, La Salle, Penn and Temple have long had their rivalry games intertwined in the fabric of Philly sports. But the Quakers are not playing this season because the entire Ivy League is shut down and the “Big 4” just doesn't have the same ring to it.

“It's been hard trying to get my arms around this entire situation,” said Temple coach Aaron McKie, whose team has had a number of schedule changes due to positive tests and contact tracing. “But it's our reality now. It's what everybody throughout the country is dealing with.”

There are some benefits to traditions taking a hike.

The poor student in The Hawk mascot costume at Saint Joseph's might get a break from flapping his wings the entire night and maybe there will be no need to dodge tortillas during visits to Texas Tech.

For the first time in 35 years, John Brown University in Arkansas won't have to deal with the same old technical foul in its home opener — there won't be a capacity crowd unfurling 2,000 rolls of toilet paper onto the court when the Golden Eagles score their first points.

“Times are very different,” Kentucky guard Davion Mintz said. "We’re definitely going to have to find energy from within ourselves. I know that it will be very different. I say that it will actually be pretty tough coming out starting, but like I said, we have to find energy from within each other, kind of get each other motivated. Realize that we are on TV playing, so there are still our fans around the world watching. Just try to make it work.”