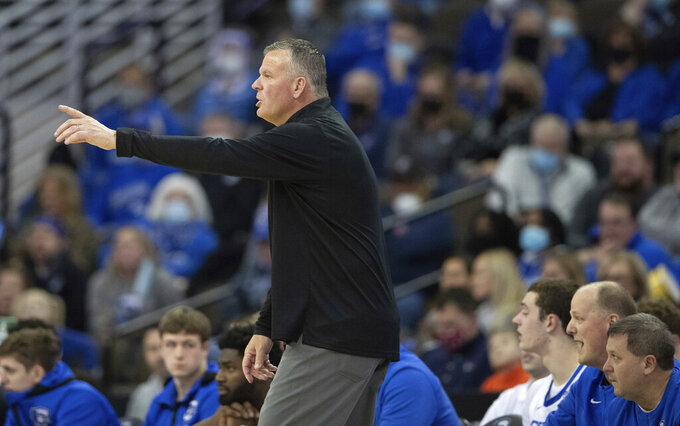 Creighton head coach Greg McDermott yells to his team as they play against St. John's during the first half of an NCAA college basketball game Wednesday, Jan. 19, 2022, in Omaha, Neb. (AP Photo/Rebecca S. Gratz)

Creighton coach Greg McDermott has tested positive for COVID-19 and will not be with the Bluejays when they play DePaul on Saturday in Omaha, Nebraska.

The school's athletic department made the announcement Friday. A spokesman said McDermott, who has had two vaccinations and a booster shot, is experiencing mild symptoms.

The Bluejays (11-5, 3-2) have had three Big East games postponed because of COVID-19 issues in the opponent's program. Two have been rescheduled for February.

McDermott, 57, missed Monday's practice and part of Tuesday's for what was described as a “minor medical procedure.” He was on the bench of the Bluejays' 87-64 home win over St. John's on Wednesday.