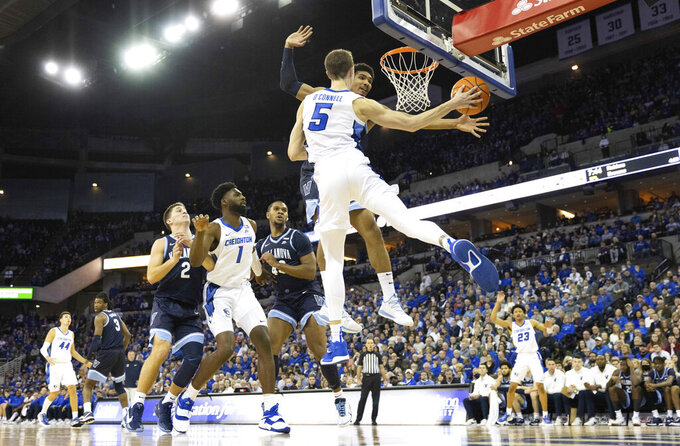 OMAHA, Neb. (AP) — Not much was expected of Creighton this season, not with its roster full of newcomers.

The Bluejays might be better than thought, judging by their performance against Villanova on Friday night.

Ryan Hawkins scored 19 points to lead four players in double figures, and the Bluejays closed with a flurry in a 79-59 victory over the ninth-ranked Wildcats.

A team with no returning starters that was picked to finished eighth in the 11-team Big East isn't supposed to rout the conference standard bearer, especially not in the league opener.

“I just don’t think they know any better yet. I really don’t,” said Creighton coach Greg McDermott, who starts two freshmen and a sophomore. “Our young guys are really good. They don’t have a care in the world. They just kind of play the game.”

Ryan Nembhard had 11 of his 14 points in the second half as the Bluejays knocked off a second ranked opponent in seven days. Alex O’Connell added 12 points and Trey Alexander had 10 for Creighton, which beat No. 24 BYU 83-71 last Saturday before losing 58-57 at home to Arizona State on Tuesday.

“Would I have guessed we could beat a couple ranked teams in a week’s time? Probably not,” McDermott said. “Let’s be honest, we’re learning and growing. It’s coming together. I said it early in the season, there is going to be some inconsistency, peaks and valleys. We had a good peak Saturday against BYU, a valley against Arizona State and now we climbed out of it.”

Villanova, for its part, has a big hole to dig out of right now. The Wildcats, beaten 57-36 at top-ranked Baylor in their previous game, have consecutive losses of 20 or more points for the first time in Jay Wright's 21 years as coach. In their last three games, they are 23 of 100 on 3-pointers.

“We're struggling,” Wright said. “Every guy individually is trying to get us going and we're kind of losing our rhythm offensively. We have to learn from this and we're going to have to get that back.”

Collin Gillespie scored 16 points and Eric Dixon had a career-high 15 for the defending conference champion Wildcats, who shot just 33%.

Ryan Kalkbrenner, the Bluejays' 7-footer, had nine rebounds to go with his eight points, and he had four of his five blocks in the second half.

There were 10 lead changes and two ties before Creighton got on a roll late in the first half. The Bluejays made five straight shots during a 15-5 spurt. Hawkins scored eight points in two minutes and Nembhard made a 3 from the wing to put Creighton up 35-26.

“I hardly have words for how proud I am of these guys,” McDermott said. “To bounce back from a tough one against Arizona State against such a veteran and talented team. Their (first) three losses are to three teams that could be in the Final Four. For our guys to fight the way we did and really dominate the paint, to have our bench step up the way it did ... A lot of young guys out there when the game was being decided."

Creighton: The Bluejays are only the fourth Villanova opponent to score more than 60 points. They picked up their sixth win against 'Nova since 2013-14, most of any Wildcat opponent over that span.

Villanova: The Wildcats continue to struggle offensively. They had trouble dealing with top-ranked Baylor's trapping defense in a 57-36 loss on Sunday. The offensive struggles were more self-inflicted this time. They never found a rhythm and went a season-worst 4 of 23 on 3s.