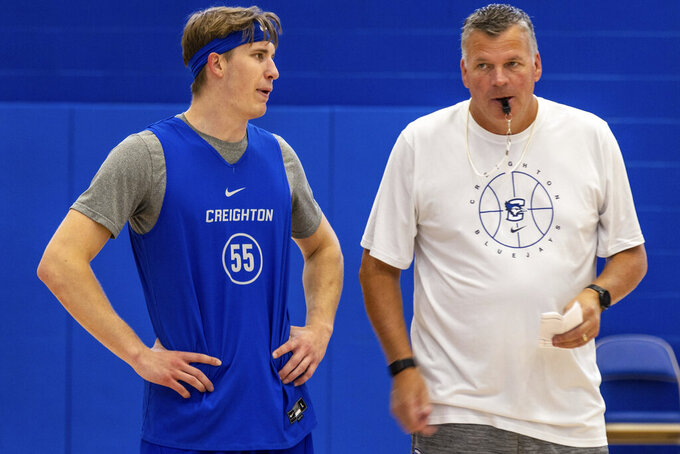 NEW YORK (AP) — For the first time since joining the Big East in 2013, Creighton is the preseason choice to win the conference.

The ninth-ranked Bluejays received eight first-place votes from the league's coaches Tuesday. Creighton returns three double-digit scorers from last season's team that finished 23-12 and advanced to the second round of the NCAA Tournament.

Coach Greg McDermott didn't put too much stock in the Bluejays' place in the preseason poll.

“It's based off what you did last year and who you return and we return a pretty good core," he said. "I think, in this year with the transfer portal, it gets more difficult to predict preseason conference rankings and national rankings because you just don't know how transfers are going to fit in.”

Xavier, which received two top votes, was picked second. The Musketeers went 23-13 last season and won the NIT championship. They welcomed back coach Sean Miller, who was in charge of the program from 2004-09.

Villanova, the defending conference tournament champion, was picked third — one point behind Xavier. It's the first time since 2013-14 that the 16th-ranked Wildcats were not picked first or second. Hall of Fame coach Jay Wright retired and the Wildcats are now led by Kyle Neptune. He has the conference's pick for Freshman of the Year in Cam Whitmore.

Connecticut was picked fourth and is led by preseason Big East Player of the Year Adama Sanogo. Providence, which won the Big East regular-season crown last year, was chosen to come in fifth. The Friars reached the Sweet 16 last season for the first time in 25 years.

Butler, Marquette, Georgetown and DePaul round out the selections.

Motta, Holloway, Neptune and Miller are all back in the Big East after spending a few years in other places. All are happy to have returned.

Neptune got his start as a video coordinator at Villanova in 2008 before coming back as an assistant in 2013. He spent the next eight seasons with the Wildcats before getting the head job at Fordham. He left the Rams to take over the Wildcats when Wright retired.

“I got my basketball education here,” Neptune said. “I think the core of what I believe in is what I learned here.”