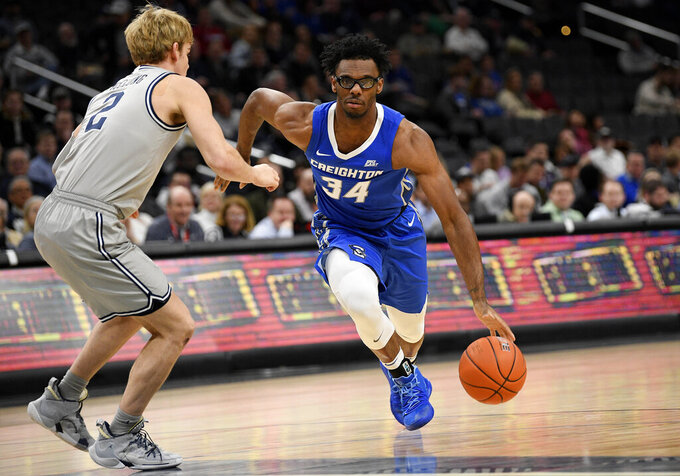 FILE - In this Wednesday, Jan. 15, 2020 file photo, Creighton guard Denzel Mahoney (34) dribbles the ball next to Georgetown guard Mac McClung (2) during the first half of an NCAA college basketball game in Washington. Denzel Mahoney has joined Creighton teammate Ty-Shon Alexander in declaring for the NBA draft. He announced his decision on Thursday, April 16, 2020. (AP Photo/Nick Wass, File)

Mahoney played 21 games for the Bluejays after transferring from Southeast Missouri and averaged 12 points and 3.1 rebounds as a reserve wing.

He announced his decision on Thursday.

Mahoney can return to Creighton after going through the evaluation process by league executives as long as he doesn't sign with an agent and withdraws from the draft by June 3.

Creighton finished 24-7, won a share of the Big East regular-season championship and was No. 7 in the final Associated Press poll.