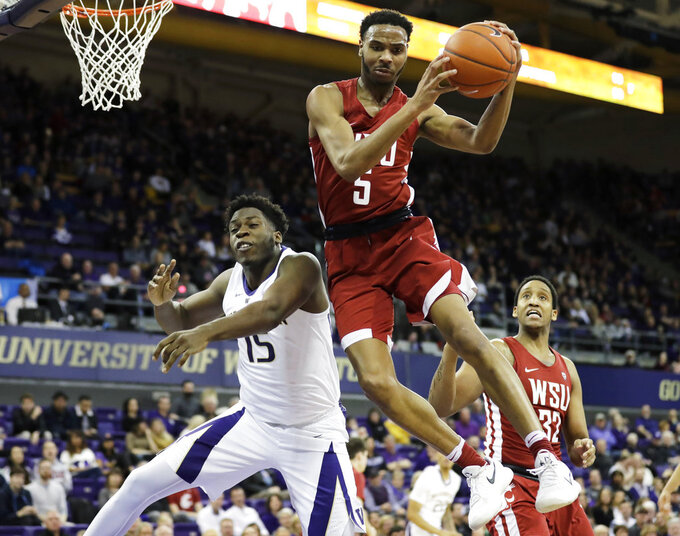 SEATTLE (AP) — Senior point guard David Crisp couldn't repeat exactly what was said by Washington head coach Mike Hopkins during the timeout after the Huskies fell behind following an 8-2 Washington State run to open the second half. But whatever the message was, it must've gotten across.

"Pretty much lit a fire under our butts," Crisp said of the timeout message. ". Once we see him getting on us like that, it's like we knew messed up so let's get out there and correct it. . We just got back, sharpened up, and went on that run."

"We were able to get the ball and push it in transition," Hopkins said. "We had a really good shooting night, and when you do that you are going to win a lot of games."

CJ Elleby and Jervae Robinson knocked down back-to-back 3-pointers to give Washington State a 46-45 advantage with 16:59 remaining and force a Washington timeout.

But the lead was short lived, as the Huskies found Noah Dickerson for a dunk out of the timeout. Nowell and Matisse Thybulle capped the run with back-to-back 3-pointers, and the Huskies led by double figures the rest of the way.

"At the end of the day, all you are doing as a coach is trying to push the buttons to get them to respond," Hopkins said. "Sometimes it's shaking them and sometimes it's waking them up."

Following slow starts in their final two nonconference games, the Huskies came out firing in the opening minutes Saturday, knocking down their first four shots, including three 3-pointers, as they jumped to a 10-3 lead.

But the teams would trade runs before the Huskies took a 43-38 advantage in to the break. After the Cougars cut the UW lead to 16-13 following an Elleby jumper with 15:30 remaining, the Huskies scored the next 10 points to build their largest lead of the period. The Cougars answered by knocking down four 3-pointers as part of a 16-7 run to cut their deficit back down to one, at 33-32, before Nowell poured in eight of Washington's final 10 first-half points, capped by a floater in traffic with one second remaining.

Playing without leading scorer Robert Franks for the second straight game, Elleby carried the load for the Cougars offensively, finishing with a game-high 26 points and 10 rebounds. The Seattle native and graduate of nearby Cleveland High School has scored in double figures in 10 straight.

Thybulle added 17 points for the Huskies converting all four of his field goals, including three 3-pointers, and making 6 of 6 from the free-throw line.

Crisp entered the night shooting just 38.9 percent from the field and 29.3 percent from 3-point range, but was an efficient 7-of-11, including 3 of 4 from deep, on Saturday.

"Once we are playing basketball the right way, making the extra pass, finding the open man, the ball is moving, you got flow in the offense and you see what happens," Crisp said.

Robinson added 14 points for the Cougars, who dropped their fourth straight.

Washington State: The Cougars need Franks to return to the lineup before they have the capability of snapping of their losing streak and remaining competitive in conference play.

Washington: The Huskies finally put together the complete game effort Hopkins has been looking for, a positive sign as the Huskies look to compete for an up-for-grabs Pac-12 regular season title.

The Huskies officially announced the signing of transfer Quade Green on Friday. Green joins the Huskies after 43 games with Kentucky, and will have two and half years of eligibility remaining with Washington when he becomes available to play during the 2019-2020 season, according to Hopkins.

Green, a former McDonald's All-American, averaged 9.3 points during his freshman season with the Wildcats. In eight games with Kentucky this season, he averaged 7.8 points on 45.5 percent shooting.

Franks, who is averaging 22.1 points per game, did not dress for the second straight game due to a hip contusion suffered in the second half of a 75-72 loss to New Mexico State on December 23.

Washington: The Huskies play at Utah on Thursday.