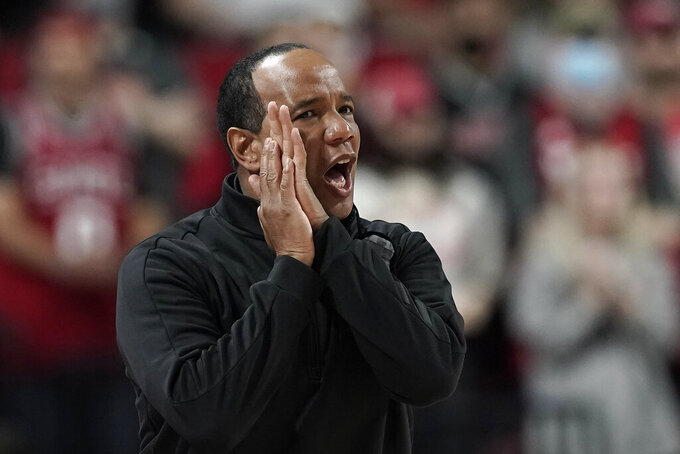 RALEIGH, N.C. (AP) — Matt Cross blocked a 3-pointer and made a 3-pointer in the final minute, Louisville scored the game's final nine points and the Cardinals defeated NC State 73-68 on Saturday in the ACC opener for both teams.

After Louisville's Noah Locke hit a 3-pointer that tied the game at 68 with 1:33 to go, Cross blocked a 3-pointer attempt by Jericole Hellems then buried the go-ahead 3-pointer from the left corner with 28 seconds to go. Cam Hayes missed a 3-pointer for the Wolfpack with 12 seconds left and Jarrod West capped the scoring, making two free throws with 7 seconds remaining.

Malik Williams led Louisville (6-2) with 14 points and 11 rebounds. Cross had 13 points with seven rebounds and made 3 of 6 3-point tries. Locke scored 12 points, all on 4-of-8 3-point shooting. Dre Davis and El Ellis scored 11 points each.

NC State's Dereon Seabron, comiing off a 39-point, 19-rebound game against Nebraska, was held to 11 points on 4-of-13 shooting with nine rebounds. Hellems led the Wolfpack with 18 points, Hayes scored 15 and Terquavion Smith had 17. The starters scored all 68 points for the Wolfpack.

It was Louisville's 12th win in the past 14 conference openers.