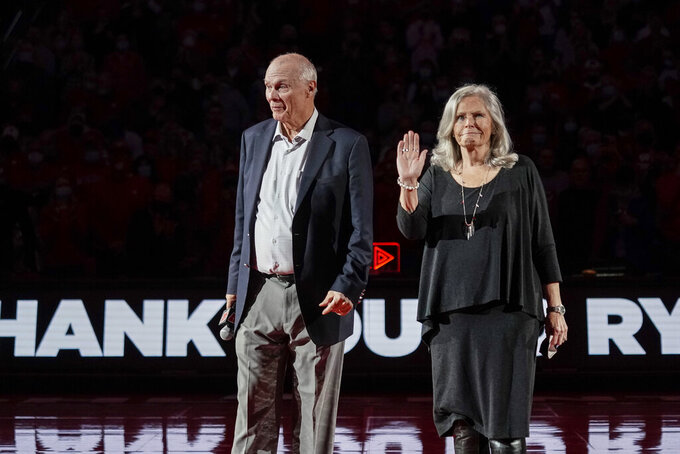 Bo Ryan, a former Wisconsin basketball coach, and his wife Kelly Ryan acknowledge the crowd during a ceremony to celebrate the coach's 15 seasons as the head coach in a ceremony at halftime at a NCAA college basketball game between Wisconsin and Wisconsin-Green Bay Friday, Nov. 12, 2021, in Madison, Wis. Ryan led Wisconsin to a school-record of 364 wins in 15 seasons. (AP Photo/Andy Manis)

Ryan, who retired six years ago, was honored earlier in the day with a spot on the Kohl Center Legends Walk.

Johnny Davis and Brad Davison each scored 15 points for the Badgers, who have won their first two games by an average of 30.5 points.

UW held the Phoenix to one basket over a stretch of 17 possessions in the first half,

Cem Kirciman and Tutu Majok each scored five points for the Phoenix which shot 12 for 51 (23.5%).