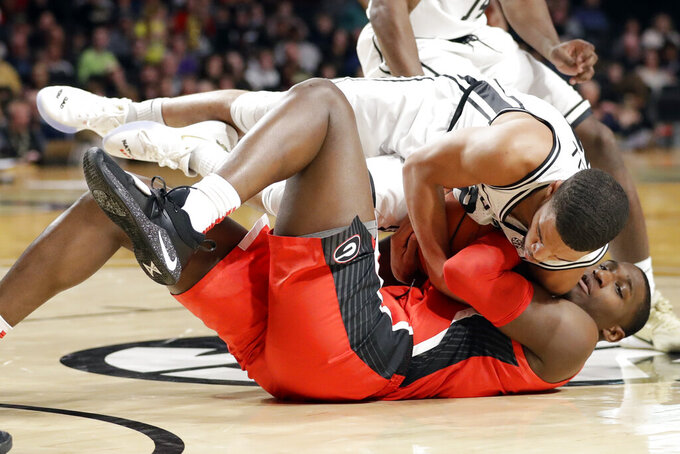 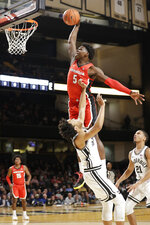 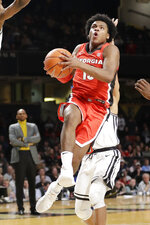 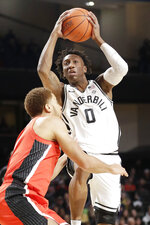 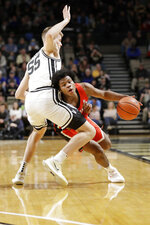 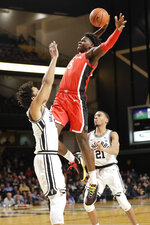 NASHVILLE, Tenn. (AP) — Georgia coach Tom Crean called Tyree Crump's 35-foot winning shot the final buzzer “a broken play,” but it was good enough to rally the Bulldogs to an 80-78 victory over host Vanderbilt on Saturday in a matchup of the bottom two teams in the Southeastern Conference.

Crump came up with a loose ball on the second of two missed free throws by Vanderbilt's Scotty Pippen Jr. with 5.1 seconds to play, headed down court and launched the shot that gave the Bulldogs (14-13, 4-10) the improbable win.

“We actually had a play called that we reviewed today, if he had made the free throws,” Crean said. “It was a broken play, but at the end of the day it's concepts. You really get a dribble per second and he didn't pull it up short.”

Crump said he glanced at the clock when he grabbed the ball and drove down the floor aiming to shoot with confidence.

“I just looked at the clock and saw like three seconds. I knew I was going to make it, so I just shot it with confidence,” Crump said.

Crean indicated that the Bulldogs had practiced some half-court shots in Friday night's shootaround in Memorial Gymnasium.

“I didn't do any coaching other than free throws, but I then we worked on half-court shots,” Crean said.

It came in handy for Crump.

“I definitely made one,” Crump said of his practice time the night before.

Crump's basket spoiled a career-high 34-point game from Vanderbilt's Saben Lee, who had been 10 of 10 at the free throw line before missing the front end of a one-and-one with 12.4 seconds left and Vanderbilt (9-18, 1-13) leading 78-75. Sahvir Wheeler made two foul shots with six seconds to play to pull the Bulldogs within one before Pippen's two misses gave them their final opportunity.

Commodores coach Jerry Stackhouse said he felt his team played well, but just could not finish in the final seconds.

“I thought we did enough to win the game, but you've got to play until the buzzer ends,” Stackhouse said.

Vanderbilt led for much of the game, as Lee had a stellar first-half, scoring 22 points for the Commodores, who led 40-32 at halftime.

The Commodores maintained the lead and control of the game for much of the second half, trailing just one other time in the second half at 52-51, then regaining command with a 7-0 run.

Vanderbilt led by as many as five points with 22.5 seconds left.

Anthony Edwards, who fouled out with five seconds to play, led the Bulldogs 19 points. Jordan Harris added 17, while Wheeler finished with 11 points.

Pippen finished with 20 points for the Commodores and Maxwell Evans added 10.

Georgia: The Bulldogs had not won a Southeastern Conference game on the road this season before pulling off Saturday's comeback victory against Vanderbilt. Georgia has just one road win this season, at Memphis.

Vanderbilt: The Commodores keep getting closer, but still suffered another heartbreaking loss. Vanderbilt was coming off a 65-61 loss at Tennessee last Tuesday. Vanderbilt has now lost four straight inside the SEC after notching its only win with an upset against LSU on Feb. 5.

Drew Weikert, a walk-on sophomore from Nashville's Montgomery Bell Academy playing in just his second career game, made a steal and a layup as the half-time buzzer sounded to give Vanderbilt a 40-32 halftime lead. The layup marked the first points of Weikert's college career. Vanderbilt played four walk-ons in the first half against the Bulldogs. In addition to Weikert, the Commodores had Braelee Albert, Isaiah Rice and Jon Jossell on the floor in the first half.

A stretch of Nashville's 25th Ave. South near Memorial Gymnasium was named Perry Wallace Way in a ceremony two hours before Saturday's game against Georgia tipped off. Wallace was the first African American player in the Southeastern Conference, integrating the SEC in 1967. Members of Wallace's family were on hand to be recognized at halftime as well. The Commodores wore uniforms in the style of the 1967-68 season on Saturday to honor Wallace.

Georgia is at South Carolina on Wednesday.