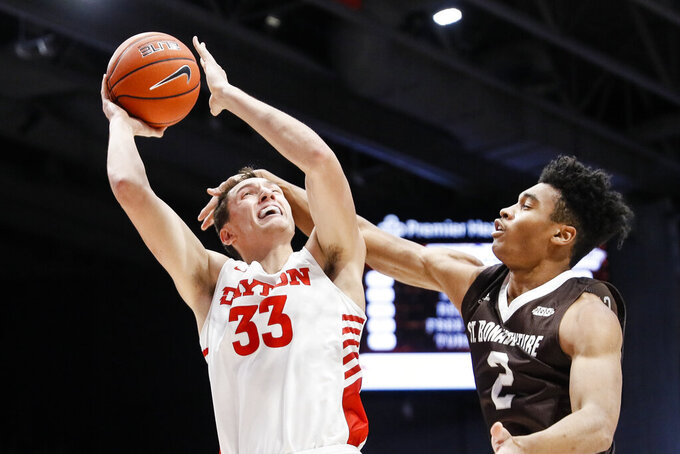 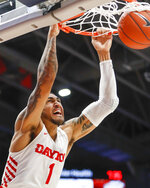 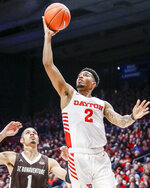 Crutcher matched his career high with 23 points, Toppin had four dunks, and No. 7 Dayton — playing with its highest ranking in 52 years — showed off its versatility while pulling away to an 86-60 victory over St. Bonaventure on Wednesday night.

Once the Flyers got going, there was no slowing them down.

“The first couple of minutes, we're out there trying to get a feel for what they're doing,” Toppin said. “Once we get used to that, get a feel for it, we put our foot on the gas and we just go.”

Fittingly, Crutcher was in the middle of it again.

The junior guard made the shot that helped the Flyers (17-2, 6-0 Atlantic 10) move into the Top 10 for the first time since December 1967. His 3 with less than a second left in overtime gave Dayton a 78-76 win at Saint Louis over the weekend.

Crutcher had his touch again Wednesday. His 3 started a 22-5 run that closed the first half and put Dayton up 47-29.

“Anytime you get a conference win by double digits, that's always a good thing,” Crutcher said.

Crutcher had a pair of 3s during the decisive spurt and a driving layup with 4.9 seconds left as he was fouled. He missed the free throw, but the ball was batted out to Toppin for a floater at the buzzer.

Crutcher went 5 of 9 from beyond the arc overall in his third straight 20-point game. He also had a team-high seven assists.

“He's a really good player, and I think he's been proving that since he stepped on campus,” coach Anthony Grant said. “He's really grown and he's maturing here.”

Toppin provided the most crowd-pleasing moments, repeatedly getting open for alley-oop dunks. He had 18 points and nine rebounds.

St. Bonaventure (12-7, 4-2) was coming off its most lopsided loss of season, 91-63 at VCU. Schmidt called a timeout after Dayton ran out to a 6-0 lead punctuated by one of Toppin's dunks, hoping to avoid another quick blowout.

The Bonnies hung in for most of the half, staying within six points until Crutcher led the late run. Schmidt called two more timeouts during the spurt but couldn't stop it.

The start of the second half was more of the same as Dayton stretched the lead to 30 points. Crutcher hit a 3 and flipped the ball over his shoulder for a basket as he was fouled. Toppin had two more dunks, one off a pass from Crutcher.

Dayton: The Flyers are the first Atlantic 10 team in six years to make it into the Top 10. Saint Louis and VCU cracked the Top 10 in 2014.

Crutcher also made the most improbable basket. Driving to the rim, he was fouled by Justin Winston. As he went down, Crutcher flipped the ball underhand over his shoulder and banked it in.

Dayton plays at Richmond on Saturday, the first of two road games.