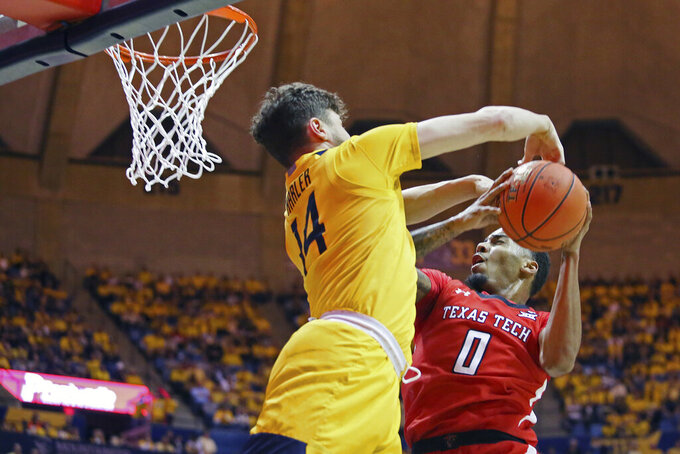 Texas Tech guard Kyler Edwards (0) goes to shoot as he is defended by West Virginia guard Chase Harler (14) during the first half of an NCAA college basketball game Saturday, Jan. 11, 2020, in Morgantown, W.Va. (AP Photo/Kathleen Batten)

MORGANTOWN, W.Va. (AP) — No. 12 West Virginia’s opponents don't have to dribble the ball past midcourt to the point of exhaustion anymore. But it comes at a cost.

In abandoning a suffocating full-court pressure defense from past seasons, the Mountaineers have doubled down on an even-greater priority: keeping teams out of the paint.

“I think this is the way we can win,” said West Virginia coach Bob Huggins, who needs two more to tie Kentucky's Adolph Rupp for seventh place all time with 876 Division I coaching victories.

With Culver and Tshiebwe swatting and altering shots with regularity, the Mountaineers have bounced back in a big way from a last place finish in the Big 12 a year ago.

West Virginia (14-2, 3-1 Big 12) has held five straight opponents to 60 points or less, and seven out of the past eight. On Saturday the Mountaineers head to Kansas State (7-9, 0-4), which has surpassed 60 points once in their last three games.

Toughness is part of the equation when Huggins recruits a player. This version of his defense is predicated on a feeding frenzy close to the basket, and the ball is the main course.

"I feel like we are the best defensive team in the country," Tshiebwe said. "It's going to be so hard for people just to beat us to the rim."

Huggins rotates his lineup often to keep fresh legs in the game. Eleven players are averaging at least 10 minutes per contest. The constant shuffling has paid off: West Virginia is second in Division I in field-goal percentage defense at 35%.

"I feel like we just have more bodies, more legs and more stamina to pull games out," Culver said. “If you want to be a team that goes deep into the (NCAA) tournament and make a deep run, you have to have defense first.”

That defense extends beyond the 3-point arc, where opponents are making just 23.8% of their attempts. Sometimes they can't get a shot off at all.

In a 66-54 win Saturday over No. 23 Texas Tech, the Red Raiders were called for three shot-clock violations in the first nine minutes and made just 28% of its field-goal attempts for the game.

“The reason we couldn’t make a shot was the other team was well-coached, has good players, was dialed in and played great defense,” said Texas Tech coach Chris Beard. "One of many parts of West Virginia’s identity is their size. (They’re) kind of a unique team, a team you don’t see much in college basketball anymore with their two bigs."

Culver and Tshiebwe are the top two scorers on the team and the two best rebounders in the Big 12, respectively, averaging a combined 19 per game, including 12 on the defensive end. Tshiebwe has four games so far with at least 17 rebounds.

“I think they’re a notch above in rebounding,” said TCU coach Jamie Dixon.

It doesn't get much easier with their replacements, 6-11 Logan Routt and defensive specialist Gabe Osabuohien.

Osabuohien, an Arkansas transfer, has quickly become a crowd favorite, drawing charges and jumping into piles for loose balls. He even dished out five assists in the 81-49 win Tuesday over TCU.

“Gabe is a Swiss army knife. He can do anything,” Culver said. “He plays defense second-to-none. He's upbeat and he's working his tail off.”

Something else came alive Tuesday for the Mountaineers that hasn't been seen much lately.

With 15 minutes left, West Virginia led 44-36. The Mountaineers scored 37 points the rest of the game.