Cumberland leads No. 23 Cincinnati over Memphis 71-69 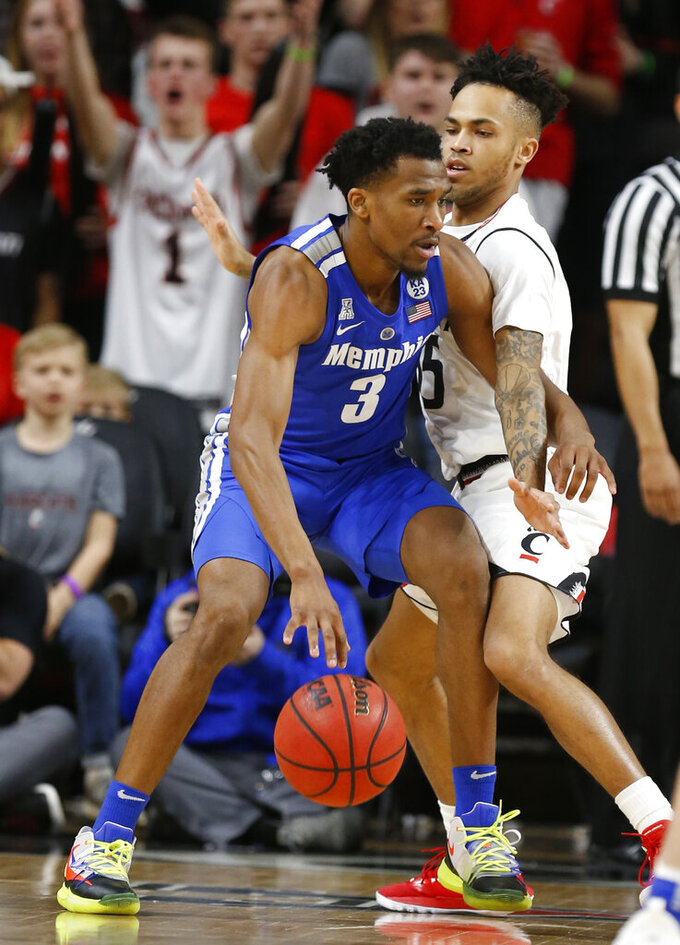 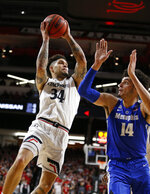 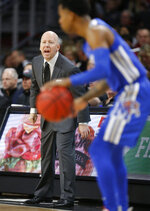 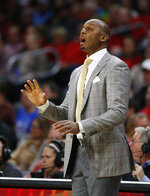 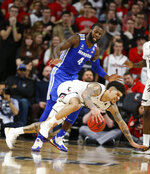 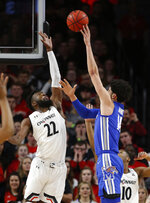 CINCINNATI (AP) — Freshman guard Logan Johnson knew Memphis was going to set up the league's top scorer for the last shot, so he made sure Jeremiah Martin wouldn't touch the ball.

Johnson stole a pass in the closing seconds to clinch a 71-69 victory over Memphis on Saturday night that moved No. 23 Cincinnati into a first-place tie in the American Athletic Conference.

Jarron Cumberland overcame a sluggish first half and scored 26 points to keep the Bearcats ahead, and Johnson finished it by stepping in front of a pass intended for Martin, who had 28 points and gave the Tigers (18-12, 10-7) a chance at the end.

"I assumed they were going to him, so I tried to jump it," Johnson said. "It was just me in the moment reading it."

The Bearcats (25-4, 14-2) are tied with Houston atop the league. They finish the regular season by facing each other in Cincinnati next Sunday.

Martin hit a 3-pointer and made a layup that cut it to 70-69 with 6.8 seconds left. Cincinnati's Trevon Scott hit a free throw with 4.9 seconds to go, and Johnson sealed it.

"We had 'em right where we wanted them," Memphis coach Penny Hardaway said. "When plays had to be made, they made them."

A chippy game overflowed in the closing minutes.

Cumberland and Antwann Jones got technical fouls with 7:38 left for an exchange under the basket. Cincinnati point guard Justin Jenifer was ejected for coming off the bench.

Also, Memphis' Raynere Thornton tripped Cumberland as he dribbled and then stepped over him, drawing a technical foul with 4:24 left.

"That was not smart on his part," Hardaway said. "You never step over anyone. You have to walk around. I don't know why he tried to do that at that point."

Martin was hit on the left side of the face in a collision under the basket in the opening minutes and rubbed his jaw. He was examined during a timeout. Martin came in leading the league with 19.4 points per game and missed six of his nine shots in the first half, when Cincinnati led by as many as 10 points.

Cumberland had 21 points in the second half.

Cincinnati needed a win to stay ranked for another week, and the Bearcats got it by holding down the league's highest-scoring offense and getting an edge the boards 38-31.

Memphis: The Tigers suffered a major setback in their bid to get a first-round bye in the conference tournament.

Cincinnati: The Bearcats are in better position to win a second straight AAC regular season title after first-place Houston lost to UCF 69-64 at home on Saturday . The Bearcats also won the conference tournament last season.

Martin is trying to become only the fifth Memphis player to lead a league in scoring. He'd join Hardaway, who was the Great Midwest Conference's top scorer in 1992-93.

The Bearcats set a school record with their 85th win over the last three seasons.

Memphis finishes its regular season at home against Tulsa next Saturday. The Tigers lost at Tulsa 95-79 on Jan. 30.

Cincinnati plays at UCF on Thursday. The Bearcats beat the UCF 60-55 on Feb. 21.