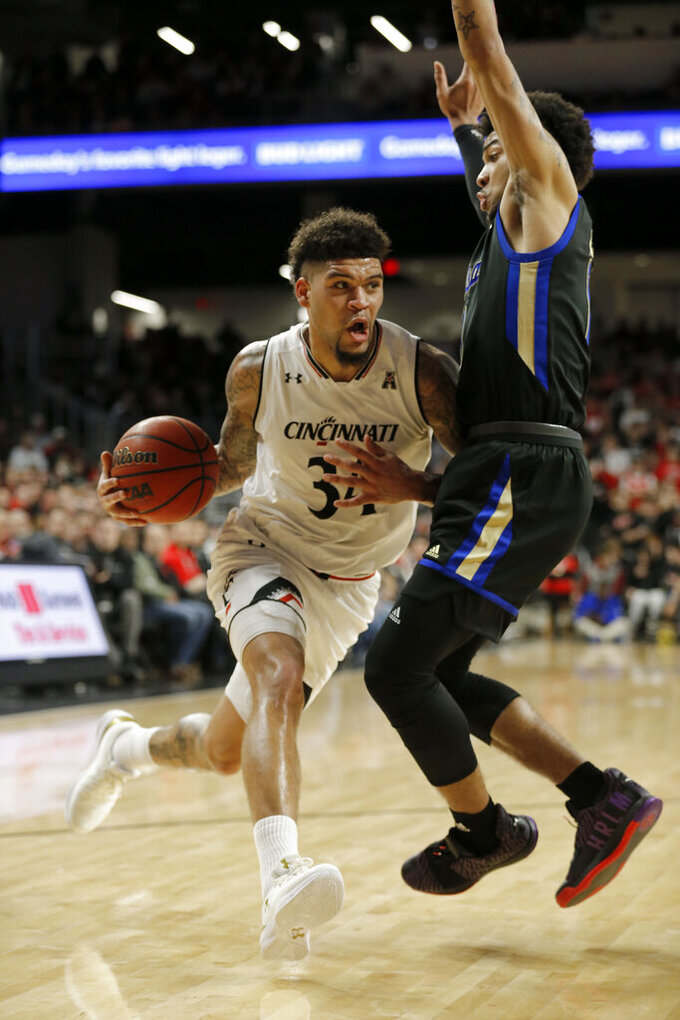 Cincinnati guard Jarron Cumberland (34) drives against a Tulsa defender during the first half of an NCAA college basketball game Thursday, Jan. 24, 2019, in Cincinnati. (Sam Greene/The Cincinnati Enquirer via AP) 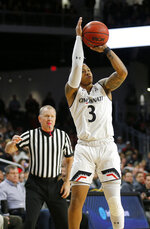 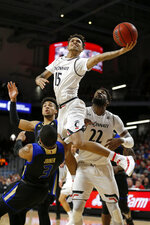 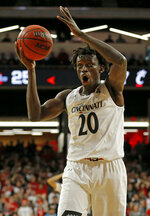 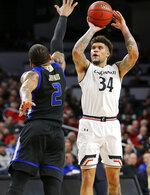 CINCINNATI (AP) — After barely escaping with an overtime win at Tulsa two weeks earlier, the Bearcats made sure the rematch wouldn't even be close.

Jarron Cumberland scored 23 points, point guard Justin Jenifer matched his career high with 18, and Cincinnati never trailed while pulling away to an 88-64 victory over Tulsa on Thursday night for a sweep of their season series.

The Bearcats (17-3, 6-1 American Athletic) have won five straight, a streak that started with an overtime win at Tulsa. The Golden Hurricane (12-8, 2-5) has dropped four of five.

Cincinnati has lost its two most high-profile games this season, at home against Ohio State and at No. 18 Mississippi State. The Bearcats play at Temple on Sunday and at No. 17 Houston on Feb. 10 before finishing the regular season at home against Houston, its best chances for meaningful wins.

"You've got to win certain kinds of games if you want respect," coach Mick Cronin said. "Our schedule's back-loaded. We've got a lot of tough games."

Jenifer got open 3s and hit a career-high 6 of 10 from beyond the arc, helping the Bearcats stay comfortably ahead. They led by 15 points in the first half and as many as 25 in the second. Cincinnati made a season-high 14 shots from beyond the arc.

Trevon Scott had 13 points and 11 rebounds for Cincinnati, his fourth double-double of the season.

"I'm confident every time I shoot it," said Scott, who was 6 of 7 from the field and made his third 3-pointer of the season. "The first one felt good, so I took another one. I made that one and took another one."

Tulsa let one slip away when it hosted the Bearcats on Jan. 10, giving up a six-point lead in the final 76 seconds. Cane Broome scored the Bearcats' last 14 points in regulation, including a tying jumper with 1.2 seconds left, and Cincinnati won in overtime 70-65 .

The Golden Hurricane couldn't slow down Cincinnati in the rematch. The Bearcats shot 49 percent and made seven of their first 10 shots to open the second half.

"Our communication on the defensive end was really poor, the worst we've had all year," coach Frank Haith said. "But they did a really good job. A lot of it was they made some really tough 3s, too."

Tulsa: The Golden Hurricane made a season-high 14 3-pointers in the overtime loss to Cincinnati two weeks ago. Tulsa missed its first four attempts on Wednesday and didn't hit one until it trailed by 15 points. Tulsa finished only 8 of 23 beyond the arc, a reflection of Cincinnati's focus on defense.

Cincinnati: The Bearcats were fortunate to get the overtime win at Tulsa, which wasted a chance to close it out at the free-throw line. In the rematch, Cincinnati opened with a 10-2 lead — Tulsa missed its first five shots — and was never threatened.

Tulsa is second in the AAC in free throws attempted and made, getting more than 30 free throws in seven of its games. The Bearcats got the better of it, going 10 of 20 on free throws while Tulsa was 8 of 19.

Tulsa hosts Houston on Sunday. The Hurricane lost at Houston 74-56 on Jan. 2.

Cincinnati plays Temple in Philadelphia on Sunday, the Bearcats' only game against the Owls in the regular season.