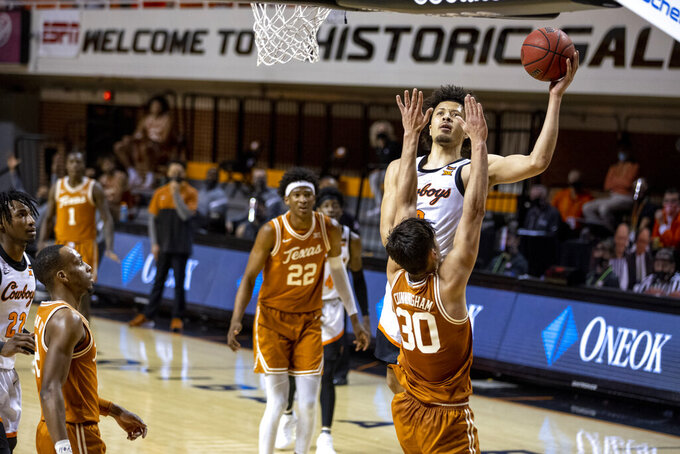 STILLWATER, Okla. (AP) — Cade Cunningham persevered through a rough game before coming up with the big plays at the end.

Cunningham, one of the nation’s top freshmen, scored five of his 19 points in the second overtime, including a contested 3-pointer with 1:33 left, to help No. 24 Oklahoma State beat sixth-ranked Texas 75-67 on Saturday.

Kalib Boone led OSU with 22 points, 15 rebounds and five blocks, including two in the second overtime after Cunningham had staked the Cowboys to a 74-67 lead with the 3-pointer and two free throws.

“I knew watching Kalib last year that he had great potential,” Cunningham said. “Now he’s not thinking as much and just playing. He’s is one of the best big men in the Big 12 now. He really is.”

“We didn’t shoot it great, but we played with a lot of determination and fire which we didn’t do the other night at TCU,” said Oklahoma State coach Mike Boynton.

Cunningham scored the final basket in regulation, a 3-pointer with 52 seconds left to tie the score at 59. He had two turnovers in the final minute of the first overtime, but also swiped a Texas inbounds pass with four seconds left. But he missed a short floater in the lane and the game went to a second extra period.

Cunningham made just 5 of 22 shots from the field and committed six turnovers in the physical contest. He finished with eight rebounds and two assists.

“He’s a 19-year-old and still figuring it out,” Boynton said. “I’d love for him to make the right play every time. . . Texas’ length bothered him some but he stuck with it.”

Texas trailed 35-29 at the half, but held OSU to just 24 points in the second half and led most of the final 10 minutes, including a 51-46 advantage after a put back by Greg Brown with 6:42 to play. The Cowboys knotted the score just over a minute later.

“We played hard and for the most part got pretty decent shots,” said Texas coach Shaka Smart. “We obviously didn’t make many. Give OSU credit but we had 21 turnovers. That’s 21 possessions where you don’t even have a chance to get a shot up.”

Texas, which has had three games postponed or cancelled since Jan. 20, has now lost three consecutive and fell to 2-1 in true road games on the season. All three were against ranked teams. Three of the next four games are against unranked teams (Kansas State, TCU and Iowa State along with a rematch with Oklahoma). ... It was an NCAA Tournament resume building win for OSU, which has appealed its banishment from the 2021 event. It’s only previous victory over a ranked team was an 82-77 overtime win at then No. 13 Texas Tech, bringing its record to 2-3 against ranked foes with games against Oklahoma and West Virginia postponed

Boone’s big game continued a trend of a hot start leads to big numbers. “We challenged him after the TCU game,” Boynton said. “Now we need to get to the point where if he doesn’t have a great start, he still sticks with it and has a good game.”

OSU was floundering in the second half, having scored just 11 points in the first 14 minutes before a drive by Anderson and a 3-pointer by Flavors knotted the game at 51-51. Neither team led by more than 3 points after that until a steal and layup by Williams put OSU ahead 69-65 with 3:32 left in the second overtime.

Oklahoma State goes for a rare season sweep of Kansas in a nationally-televised game Monday.