Cyclones hoping they can build on surprise run to Sweet 16 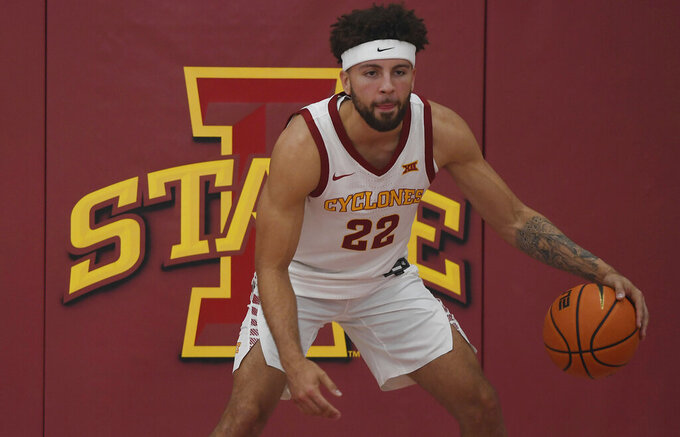 T.J. Otzelberger will be hard-pressed to top what he did in his first season at Iowa State.

Otzelberger inherited a two-win team and led it to a 20-win improvement and the Sweet 16, making the Cyclones the first team to go that far in the NCAA Tournament after winning so few games the previous season.

“I know there’s going to be the common theme of comparing this year to last year," Otzelberger said. “A lot of gratitude to the team and the group that we had, but we need to focus on this year’s group, what this year’s group can be and will be.”

Big 12 newcomer of the year Izaiah Brockington and conference freshman of the year Tyrese Hunter have moved on, and projected starting point guard Jeremiah Williams is out for the season with an Achilles tendon tear. Conference coaches have picked the Cyclones to finish eighth.

Otzelberger didn't have to go far to find Lipsey, who was Iowa's player of the year at Ames High. The coach said Lipsey is mature for his age, confident and eager to celebrate his teammates' successes.

“We have a lot of confidence in what he’s going to do right from the jump,” Otzelberger said. “So it’s a neat story. I’m excited to see how he continues to handle things.”

“Eli’s a tremendous passer who’s played that position for a lot of years as well,” Otzelberger said. “So we’ll look at all three options and continue to look at combinations.”

Guard Caleb Grill averaged 6.4 points per game and shot 35% on 3-pointers while making a team-high 57.

Forward Aljaž Kunc averaged 6.0 points and 4.1 rebounds, mostly off the bench, and shot a career-best 39% on 3s.

Forward Robert Jones spent most of the season as a reserve but started all three NCAA Tournament games, and Otzelberger expects Jones to improve his numbers.

In addition to Lipsey and King, the Cyclones signed guard Demarion Watson from Maple Grove, Minnesota. He's the highest ranked of the three after averaging 14.1 points, 6.9 rebounds and 4.1 blocked shots as a senior.

Six transfers, including Holmes and the injured Williams (Temple), joined the team.

The best of them is center Osun Osunniyi, who is St. Bonaventure's all-time leader in blocks (305) and among six players in program history to record 1,000 points and 800 rebounds.

Otzelberger has signed 11 players from the transfer portal and four from high schools since he arrived.

“I’ll always be somebody that believes that the best for the long term and the growth of the program is bringing in great high school players who develop in your program and you retain them,” he said.

He said he plans to recruit high school players aggressively but also knows the portal is available if he needs help in a hurry.

The Cyclones open the regular season at home against IUPUI on Nov. 7. The nonconference schedule is highlighted by a trip to the Phil Knight Invitational in Oregon over Thanksgiving. No. 16 Villanova is the first opponent, and No. 1 North Carolina or Portland would be the second. Big 12 play opens Dec. 31 at home against No. 5 Baylor.