Cyclones try to recapture home magic as No. 3 Kansas looms 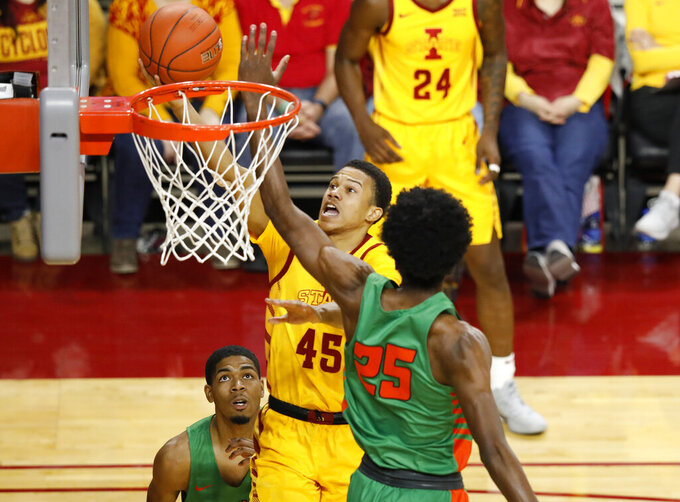 “How frustrating is it to struggle at home?”

It’s been posed to Haliburton, his teammates and his coach, Steve Prohm, multiple times — and for good reason.

“It’s an emphasis, obviously,” said Haliburton, who didn’t play because of a sprained wrist in Iowa State’s shocking 70-68 home loss last week to Florida A&M (2-11 ). “We’ve talked about it since the start of the year to defend home court and, obviously, didn’t have a great showing the last time we played here. So just got to come out and continue to treat this program the right way — the guys who came before us and our fan base and even ourselves the right way. We’ve got to put that one behind us and move forward from there.”

The Jayhawks boast the league’s second-best field goal percentage defense (37.3) and rank second in rebounding margin at plus-6.7 behind 7-foot, 270-pound matchup nightmare Udoka Azubuike, who didn’t play in last season’s 77-60 loss to the Cyclones in Hilton.

“He’s a guy that you’ve really got to prepare for,” Prohm said, whose team lost three of its last four conference home games last season. "Man, zone, everything, because of his size and physicality around the basket.”

Couple Azubuike’s size and strength around the basket with guard Devon Dotson’s league-leading ability to score at 18.5 points per game and it’s hard to find an area of weakness for the Jayhawks at either end of the floor.

Prohm said he anticipates seeing four guards on the floor for Kansas most of the game, even though the Jayhawks typically start two big men in Azubuike and David McCormack.

Iowa State showed an ability to thrive with four guards in its lineup in the second half of Saturday’s 81-79 overtime loss at TCU.

“I think it’s situational,” Prohm said. “We’ve still got to figure out what’s best. The four guards has been good at times, but we’ve played well when we’ve been big.”

So Iowa State is still searching for that winning formula — home or away.

Finding the right answer starts on the defensive end. They Cyclones rank last in the Big 12 in average points allowed (71.4) and field goal percentage defense (43.3).

“Defensively is where we’ve got to wake up,” said Haliburton, who is averaging 16.7 points, 7.6 assists and 5.2 rebounds. “We get stops and get out in transition, that’s where we’re at our best, so right now it’s just about figuring out the defensive side because offensively we can score with anybody. Once we figure that out, we’ll be really hard to stop.”

And if that happens, winning at home again will take care of itself.

"I know Hilton will be phenomenal,” Prohm said. “There’s nothing like playing Kansas in there. It will be electric. It will be fun. We’ve had great success against Kansas over the last eight years and they are, obviously, 14 out of the last 15 years, they are the top-tier team in our league, so we’ll be ready. We’re going to have to play extremely well. The environment will be great, but if you want to make some noise and stick around in this thing you’ve got to win your home games.”