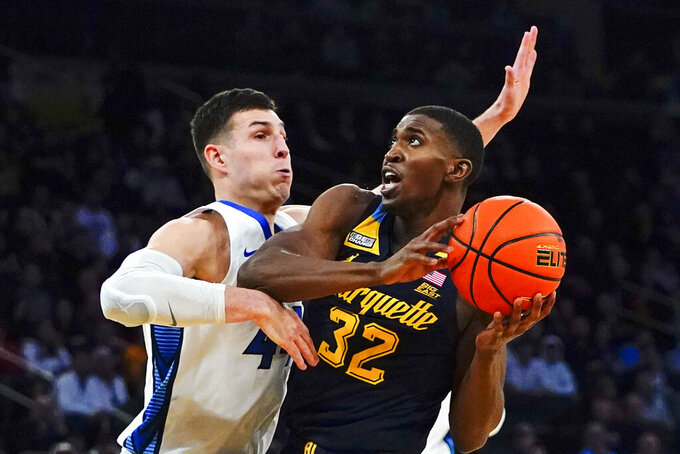 OMAHA, Neb. (AP) — Creighton's Ryan Hawkins is leading a charmed life as a basketball player, and he would be the first to tell you.

No school except tiny Wayne State in Nebraska recruited him out of high school, and he planned to go there until a coaching change gave him an out.

He landed at Division II powerhouse Northwest Missouri State, which took a chance on the awkward, skinny 6-foot-7 kid from Iowa and developed him into one of the top players in program history. The Bearcats won three national championships in his five years there.

Now look at him. He's finishing his sixth year as a collegian as the undisputed leader of a new-look Creighton team that overachieved after being picked eighth in the 11-team Big East. The Bluejays (22-11) finished fourth, reached the championship game of the conference tournament and earned the No. 9 seed in the NCAA Midwest Region. They will play eighth-seeded San Diego State (23-8) in Fort Worth, Texas, on Thursday.

Of nine Division II players who transferred to schools in the six major basketball conferences for 2021-22, none has made close to the impact Hawkins has at Creighton.

He leads the Bluejays in scoring (13.9 ppg) and rebounding (7.8 rpg) and was voted to the All-Big East second team after recording a conference-best 11 double-doubles.

Among active NCAA players, Hawkins is second with 2,556 career points and first with 1,206 rebounds. In games he's played for the Bearcats and Bluejays, his teams are 146-18.

“You’re talking about one of the greatest winners in all of college basketball,” Northwest Missouri coach Ben McCollum said.

Hawkins' experience along with his upbeat demeanor made him a perfect fit for Creighton coach Greg McDermott's team, which has had four freshmen play major minutes and has had three start.

“I was just hoping to be able to bring a leadership piece to a team that essentially had a black hole in the leadership category because their whole starting five was gone,” Hawkins said. “I thought I could insert my experience and my ability to stretch the floor into coach McDermott’s offense."

Hawkins grew up about an hour east of Omaha, in Atlantic, Iowa, and played six sports in high school. He dabbled as a quarterback in football and was naturally gifted in track and cross country. He was a star midfielder in soccer and a hard-throwing pitcher in baseball.

He was best at basketball, winning all-state first-team honors in his school's division after averaging 22 points and 13 rebounds per game as a senior. At Northwest Missouri, McCollum said Hawkins was a project, which is why he sat out his first season as a redshirt.

“I remember the first time I watched him play against our guys, and I called my assistant at the time, Austin Meyer, and I said, ‘Coach, I think we might have made a mistake on this one,'” McCollum said. “I compare it to a baby deer on ice. All over the map but super excited, super ready to go.”

Hawkins' improvement was rapid. He shot 46% on 3-pointers over his last two seasons with the Bearcats and was Most Outstanding Player at the 2021 Division II Elite Eight. He had 31 points and 18 rebounds in the national title game against West Texas A&M and left Northwest Missouri as the program's second 2,000-point scorer.

Had it not been for the NCAA allowing players a sixth year of eligibility because of the pandemic, Hawkins said, he would have been looking for a 9-to-5 job after last season. With an extra year to play, he sought a new experience.

About 40 Division I schools called the first day his name was in the transfer portal. He wanted to stay close to home, so when McDermott contacted him, he knew Creighton probably would be where he landed.

McDermott said he never doubted Hawkins' shooting ability would carry over to Division I. What impressed him most was how Hawkins let his leadership take root organically rather than forcing it.

“Ryan took the time to really get to know these guys when they first met in June, even though he’s five or six years older,” McDermott said. “They were like in sixth grade when he was a senior in high school. And because of that, they really respect what he says and they respect his daily actions. And it’s not just talk. He backs it all up with the way he is, with his positive attitude.”

“There are a lot of guys at the Division II level who can play, and I was fortunate enough to play at probably the highest level of D2 basketball in history,” Hawkins said. “But the speed of the game and athleticism is completely different here. Everything is bigger, faster stronger at this level, and that's been the biggest difference and biggest adjustment for me.”