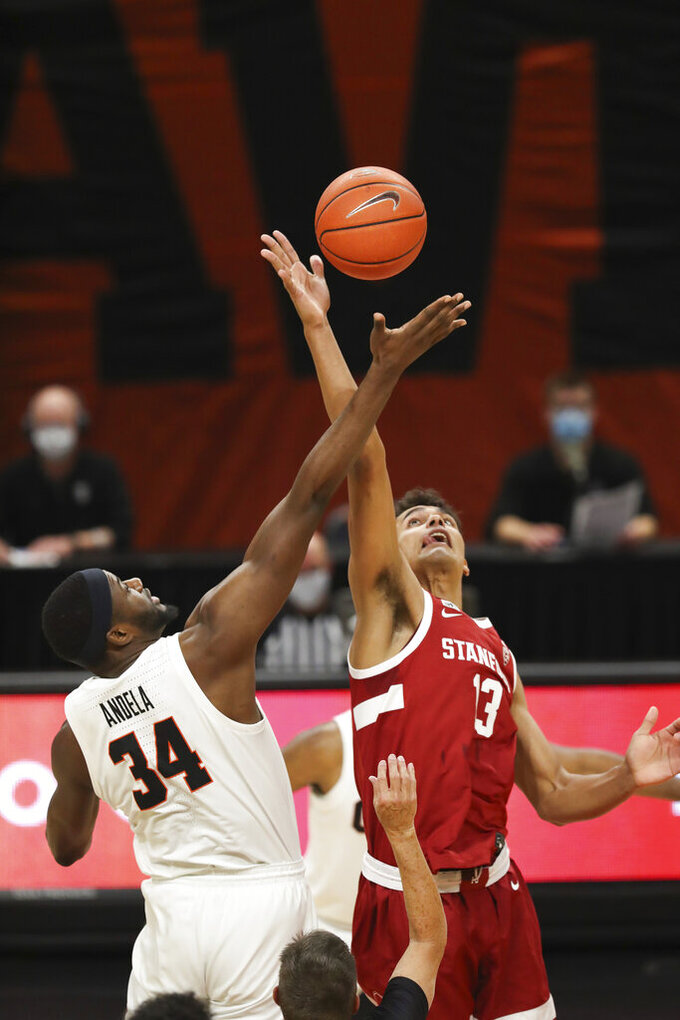 Stanford's Oscar da Silva (13) and Oregon State's Rodrigue Andela (34) go up for the tip-off during the first half of an NCAA college basketball game in Corvallis, Ore., Monday, Jan. 4, 2021. (AP Photo/Amanda Loman)

Da Silva's three-point play capped a 12-2 run to open the second half for a 10-point lead. Oregon State twice led by two points midway through the half, but da Silva and Delaire combined to score every point during a 10-0 run for a 77-64 lead with 2:11 remaining.

Da Silva was 11 of 16 from the field, getting his eighth career double-double. Delaire was 7 of 9 at the free-throw line to help Stanford make 73% of its 30 attempts.

Freshman reserve Michael O’Connell set season highs with 12 points, seven rebounds and eight assists for Stanford (6-3, 2-1 Pac-12). O’Connell, who did not turn it over, entered after starting guard Bryce Wills left the game early with an injury.

Jarod Lucas led Oregon State (5-4, 1-2) with 22 points and five 3-pointers. Gianni Hunt added a career-high 17 points and four makes from distance. Ethan Thompson was 3-of-12 shooting from the field for 10 points.

Stanford, coming off a 73-56 loss at No. 21 Oregon, is scheduled to play Washington on Thursday and Washington State on Saturday. Oregon State plays at Utah on Wednesday night.