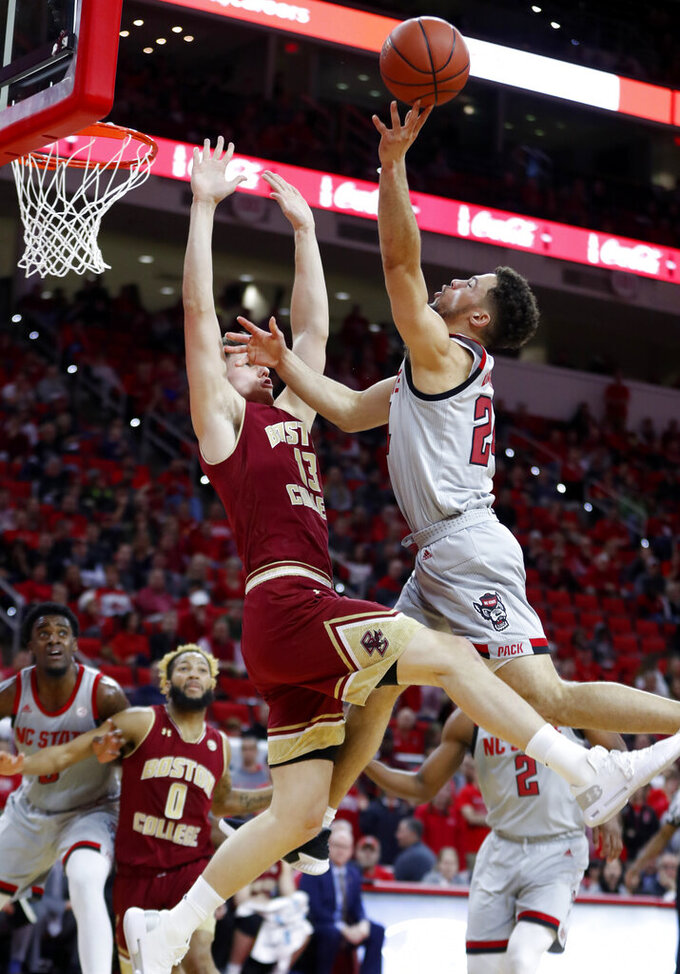 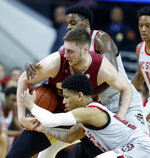 RALEIGH, N.C. (AP) — North Carolina State waited until after it had blown a big lead and survived a shot at the regulation horn to put together its best stretch of basketball Wednesday night.

The Wolfpack scored the first seven points of overtime to retake control in an 89-80 win against Boston College, earning a tougher-than-it-should've-been win considering N.C. State led by 14 points midway through the second half.

"I told our guys that going into every game from this point on, we've got a small margin for error," Wolfpack coach Kevin Keatts said. "I felt like that every game could possibly come down to the last second. ... Give our guys credit, we fought our way through."

Devon Daniels had 19 points and 11 rebounds for the Wolfpack (19-8, 7-7 Atlantic Coast Conference), who shot just 33 percent in the second half but finished with a strong kick to avoid a loss that wouldn't help its NCAA Tournament resume.

The good news was the way N.C. State followed a second half that saw the Wolfpack go 8½ minutes without a basket.

Bryce scored on a reverse layup through contact for a 3-point play, then Daniels scored on a stickback and Torin Dorn followed with a tough hanging shot. Daniels followed with a 3-pointer a short time later for an 83-75 lead with 2:11 left, a margin that would not get closer than seven points again against the Eagles (13-12, 4-9).

Nik Popovic scored 18 points for the Eagles, who trailed 64-51 with about 11½ minutes left before using a 16-0 run to turn this into a fight to the horn.

They just couldn't turn the Wolfpack away in the extra period.

"Easy baskets," Boston College coach Jim Christian said. "They got three offensive rebounds, 1-on-1 defense, we rushed the ball a couple of times, just came out of character.

"Things that got us back in the game, we got away from doing that. Guys got caught up in the game a little bit."

Boston College: BC had arrived with momentum with wins against Pittsburgh and Miami, then climbed back in this one when it threatened to get away from the Eagles. But Ky Bowman (16 points) missed a 3-pointer to close regulation, a shot that ended up being their last best chance.

"Twenty seconds to go, I'll put the ball in his hands and let him go," Christian said. "He got a pretty good look at it, same shot he's hit earlier."

N.C. State: Keatts' club is trying to bolster its NCAA Tournament resume as it goes through the final weeks of the regular season. Losing this one would've been a blow, but Daniels, Dorn (17 points) and Bryce helped the Wolfpack hang on.

It didn't help that the Eagles had to play after halftime without Jordan Chatman, the team's No. 3 scorer (13.8 points). He had 12 points by halftime on 4-for-6 shooting, but left shortly before the break with what Christian described as an aggravation of a hyperextended finger that also has a stitch-repaired cut.

It also marked the eighth straight missed game for freshman Wynston Tabbs (13.9 points) due to a knee issue.

Christian isn't sure if he'll be back this season.

"He's making progress," Christian said, "but the season's dwindling down."

Daniels also had five steals and four assists. ... Dorn had eight rebounds, with five on the offensive glass. ... The Wolfpack scored 24 points off turnovers. ... N.C. State has won eight straight meetings at home. The Eagles haven't won in Raleigh since January 2007. ... BC's Steffon Mitchell had 13 rebounds. ... Both teams had five double-figure scorers