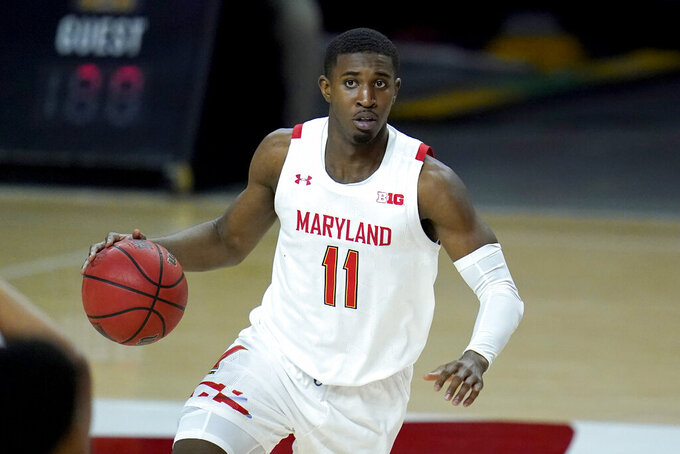 FILE - In this Feb. 17, 2021, file photo, Maryland guard Darryl Morsell works the floor against Nebraska during the second half of an NCAA college basketball game in College Park, Md. Morsell, the 2021 Big Ten defensive player of the year, has indicated via social media that he plans to transfer from Maryland to Marquette for his final season of eligibility. (AP Photo/Julio Cortez, File)

MILWAUKEE (AP) — Darryl Morsell, the 2021 Big Ten defensive player of the year, is transferring from Maryland to Marquette for his final season of eligibility.

Morsell tweeted a picture of himself in a Marquette uniform alongside the word “Committed.” Marquette announced later Monday that it had added Morsell.

“We are extremely excited about Darryl joining our program,” Marquette coach Shaka Smart said in a statement. “He comes from an outstanding family, possesses tremendous character, and impacts winning in a variety of ways. Darryl’s leadership will have a powerful affect on our team.”

Maryland coach Mark Turgeon tweeted out a statement in which he said that “Darryl gave the University of Maryland everything he had for four years and we are eternally grateful for his commitment to our program.” Turgeon noted that Morsell “gained the adoration of Maryland fans for his leadership, grit and toughness.”