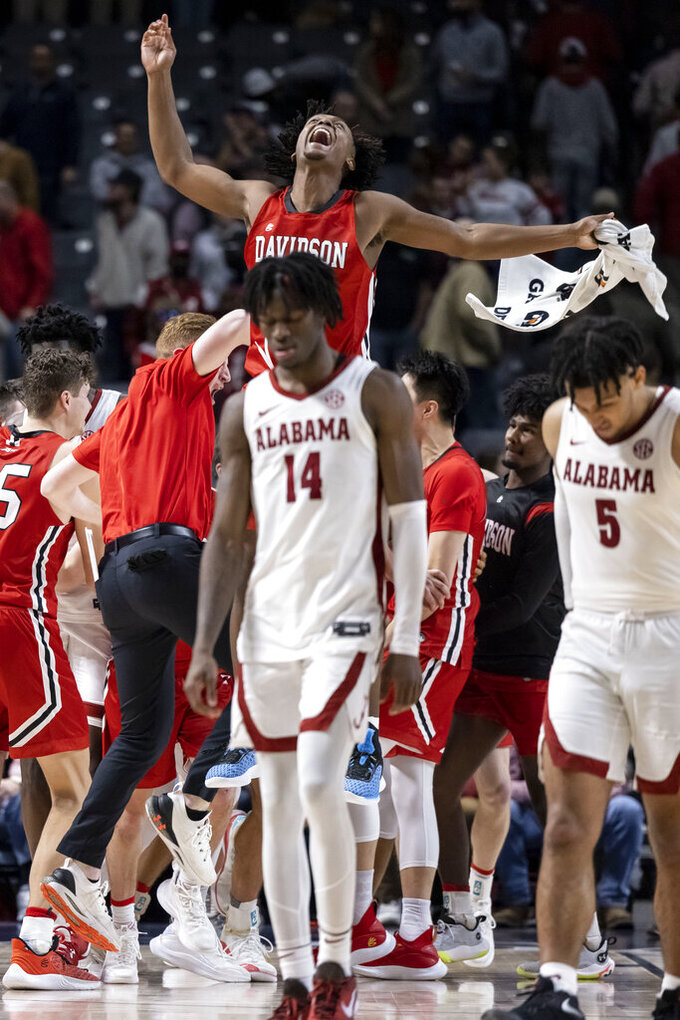 Davidson guard/forward Desmond Watson (4) leaps into the air to celebrate an upset of Alabama after an NCAA college basketball game, Tuesday, Dec. 21, 2021, in Birmingham, Ala. Also pictured walking off are Alabama guards Keon Ellis (14) and Jaden Shackelford (5). (AP Photo/Vasha Hunt) 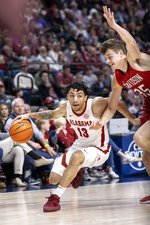 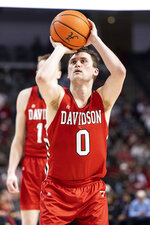 BIRMINGHAM, Ala. (AP) — Davidson made the most of an unexpected crack at a Top 10 team.

Luka Brajkovic scored 22 points and hit a late 3-pointer and Michael Jones scored 21 points to help lift the Wildcats to a 79-78 victory over No. 10 Alabama on Tuesday night.

The Wildcats (9-2) rolled to a 13-point lead early in the second half and held on for their eighth straight win in a game scheduled to fill sudden voids in their respective schedules because of COVID-19. The Crimson Tide (9-3) have dropped two of three games but stayed in this one until Jahvon Quinerly missed a potential tying free throw with four seconds left.

Alabama scored the final nine points after Brajkovic's 3-pointer with 2:01 left pushed it back to 79-69. But Davidson was able to run out the final seconds and ended up getting a huge win in the unexpected matchup.

It wasn't how the Tide wanted to head into a weeklong break for Christmas, before going into Southeastern Conference games.

“Our offense wasn’t bad, but we really lost the game on the defensive end,” Alabama coach Nate Oats said. "Not exactly what you want going into Christmas break.

“I don’t know how many wakeup calls we’re going to need to pick up the defense, but we’re not going to be able to win games in the SEC on a high level until we decide we’re going to guard much better than we did tonight.”

Jones made 8 of 11 shots, including all three 3-point attempts, for the Wildcats. Hyunjung Lee scored 17 points and made four 3s. Foster Loyer scored 11 points after totaling 59 the previous two games.

Loyer also had eight assists and just one turnover.

McKillop was grateful for the chance — and the win.

“We play a style of basketball that people don’t like to play against, as you see why,” he said. “A lot of teams at the high major level won’t play us, and Nate graciously pursued playing us. I want to say thanks to him for that.”

The Tide answered Brajkovic's ultimately decisive shot with eight points in 80 seconds. Shackelford hit a 3-pointer and Keon Ellis rebounded a missed shot, put it back, was fouled and made the subsequent free throw.

Ellis then stole the ball and fired it to Darius Miles for a dunk to make it 79-77 with 34 seconds left. Brajkovic stepped on the line after receiving the inbounds pass.

Quinerly made the first of two free throws with 4.4 seconds left, then Sam Mennenga rebounded the miss and the Wildcats called time out, forcing Alabama to foul twice.

The matchup was set after both teams had other games canceled because of COVID issues within other programs. Alabama had been set to face No. 21 Colorado State, and Davidson's game with Loyola-Chicago was also called off.

Alabama has hit a rough spot the past few games, losing 92-78 at Memphis and squeaking past Jacksonville State, 65-59. Also made 12 3s, but needed a dozen more attempts.

ROLL TIDE? McKillop is now a fan of Heisman-winning quarterback Bryce Young, whom he met in Manhattan while attending dinner at Catch Steak with Steph Curry celebrating his NBA career 3-point record.

Young was getting his picture taken with the former Davidson star.

“He’d just been in for the Heisman and he loves Steph and so he was there too,” McKillop said. “And let me tell you, if Alabama wants to be proud of some young ,man. the way that guy carried himself, absolutely extraordinary.”

Alabama opens Southeastern Conference play against No. 19 Tennessee on Dec. 29.