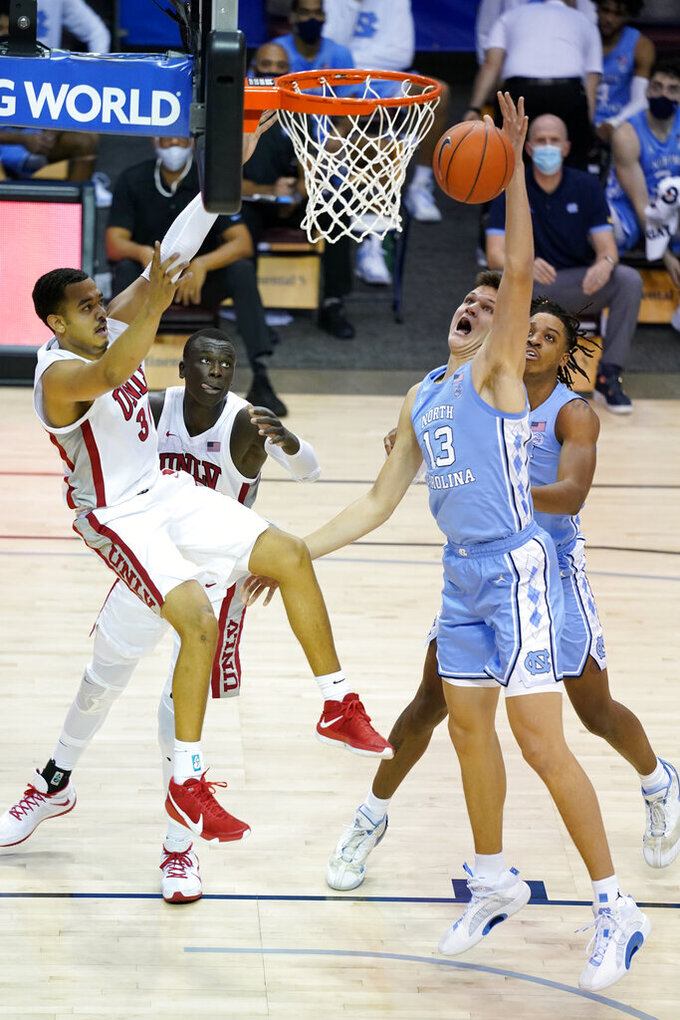 North Carolina forward Walker Kessler (13) reaches for a rebound in front of UNLV forward Devin Tillis (30) in the first half of an NCAA college basketball game in the Maui Invitational tournament, Monday, Nov. 30, 2020, in Asheville, N.C. (AP Photo/Kathy Kmonicek) 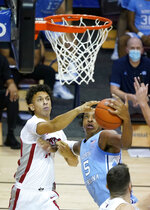 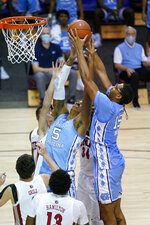 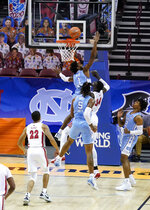 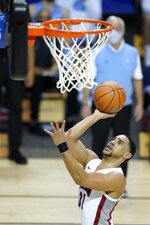 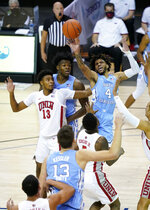 ASHEVILLE, N.C. (AP) — North Carolina started its first game of the relocated Maui Invitational so badly that it faced an immediate double-digit hole as its Hall of Fame coach benched multiple starters.

The 14th-ranked Tar Heels offered up a confidence-building response to those early troubles.

Freshman RJ Davis scored 16 points to help UNC beat UNLV 78-51 in Monday night's first round. After falling behind 13-0, the Tar Heels used a big run spanning halftime and a dominating effort on the glass to advance.

Garrison Brooks added 14 points and surpassed the 1,000-point mark for his career in the first half for the Tar Heels (2-0), who didn't score for the first 6 1/2 minutes. But UNC closed the gap, then went on a 28-4 run for its own big lead.

The Tar Heels got a big contribution from senior reserve Andrew Platek, who had 11 points and hit a pair of first-half 3-pointers after UNC sputtered out of the tipoff.

“I think we were worried for a second,” Platek said of the players' reaction to the early deficit. “But then we just knew if we played our principles and played our game plan, we were going to be fine."

Bryce Hamilton scored 15 points for the Runnin' Rebels (0-2), who hit their first five shots. But UNLV made 13 of 57 shots (22.8%) while the Tar Heels snagged seemingly every miss to finish with a 54-35 rebounding advantage.

“As the game wore on, they picked up the pressure, brought some presses, some traps, denied entries more on the wings and we didn’t do the job we needed to do to be stubborn to get open," UNLV coach T.J. Otzelberger said.

"And eventually what it did is it just pushed us out on the floor and we were running offense at 35, 40 feet, which is a challenge.”

UNC: The Tar Heels, who climbed three spots in the AP Top 25 poll Monday afternoon, came out so flat that Williams yanked four starters. But the Tar Heels settled down at both ends — particularly doing a better job of establishing their offense in the paint — and began cruising with confidence.

“I'm hoping that that will be something that will help them, there’s no question," Williams said. “But we have got to play better. I mean, you can’t spot a lot of people 13 and think you’re going to come back and win.”

UNLV: The Runnin' Rebels had a bumpy start to their second year under T.J. Otzelberger, giving up 49 first-half points in a 13-point home loss to Montana State. Afterward, Otzelberger said UNLV's “effort, energy and competitive spirit wasn’t where it needed to be.” Things looked better at Monday's start as the Runnin' Rebels slowed UNC's deep front line with double-teams, only to fade badly.

“It wasn’t that the plan started to not work,” Otzelberger said. “It was that we didn’t execute the plan."

Junior wing Leaky Black had a game-high 10 rebounds to tie his career high and lead UNC's rebounding work, while the Tar Heels had six players with at least five boards.

“We know that’s something we can lean on,” said Armando Bacot, who had 12 points and five rebounds.

The tournament is being played in the North Carolina mountains instead of its traditional Hawaii setting due to the coronavirus pandemic. That gave the Tar Heels a home-state game, albeit with fan cutouts in the seats and pumped-in crowd noise, and brought Williams back to the city where he grew up and played in high school.

UNC: The Tar Heels face Stanford, which beat Alabama in Monday's final first-round game, in the semifinals on Tuesday.

UNLV: The Runnin' Rebels fell into the consolation bracket to face Alabama on Tuesday.