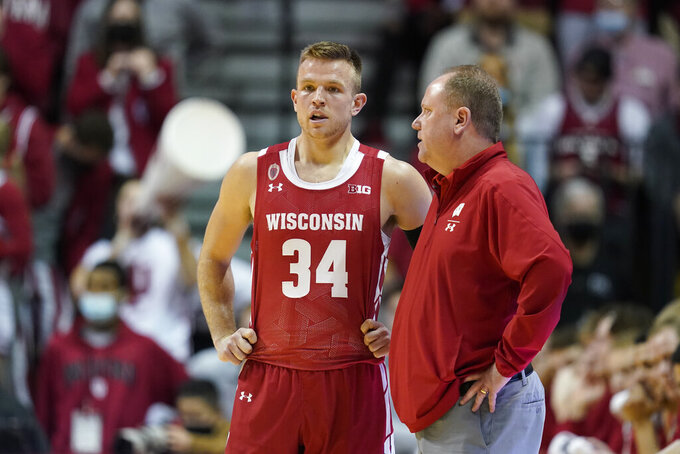 The sophomore guard scored the final 13 points for No. 15 Wisconsin, finished with 30 and boosted the Badgers' Big Ten title hopes with a 74-69 comeback victory over the Hoosiers.

“He can create something out of nothing sometimes,” Wisconsin coach Greg Gard said. “That’s what players of the year, MVPs do. When the game’s on the line they show up.”

Davis certainly did. He was 10 of 15 from the field, 10 for 14 at the free-throw line and had 12 rebounds before waving goodbye to the Indiana fans. Brad Davison added 21 points and seven rebounds for Wisconsin (20-5, 11-4), which remained one loss behind conference-leading Illinois.

The Badgers have won five straight in this series and 23 of the last 26 overall against Indiana, including a 22-point comeback in December.

Trayce Jackson-Davis had 30 points, eight rebounds and six assists, and Race Thompson added 13 points and eight boards. But again they couldn't finish, and this time the reason was Davis. Indiana has lost four in a row.

“He’s that type of player and it’s hard to double him because a lot of times he’s up top, making plays off the bounce," Hoosiers coach Mike Woodson said. “It didn’t mater who we put on him, he just played a good game and coming down the stretch, nobody could play him."

Davis had the final say in a physical, back-and-forth game that featured a little bit of everything — hostile chants directed at Davison, even a brief scuffle between Davison and Hoosiers guard Parker Stewart.

It appeared Indiana might take control when it opened a late 66-61 lead. But the Hoosiers missed nine of their final 10 shots, and Davis took full advantage.

He started the closing surge with a short runner and then made one of two free throws to to cut the deficit to two. He made it 69-68 with two more free throws and then completed a three-point play to give Wisconsin the lead with 61 seconds left.

Indiana had two chances to retake the lead in the final 30 seconds but Xavier Johnson and Stewart both missed 3-pointers, and Davis closed out the sealing 8-0 run with three more free throws.

“I was feeling it tonight and they just did a good job of finding me,” Davis said.

Wisconsin: After losing at Rutgers last week, the Badgers needed a victory to stay close in the Big Ten championship hunt. Though they won't get many style points for this one, they did get the job done and set themselves up for a big finish. Wisconsin plays three of its last five at home, including March 1 against No. 5 Purdue — the only ranked team remaining on the schedule. Wisconsin and Purdue are tied for second place in the conference standings, a half-game behind Illinois (11-3).

Indiana: The Hoosiers needed a win to stay above .500 in league play — and fortify a resume that likely has them sitting, at best, on the NCAA Tournament bubble. Again, though, Indiana failed. Instead, the Hoosiers are still four wins short of 20 and may need to win out and finish strong in the Big Ten Tournament to steal a bid.

The Badgers lost some ground last weekend and weren't terribly impressive Tuesday. Still, their second game of the week, Saturday against Michigan, may be more telling about Wisconsin's Top 25 ranking next week.