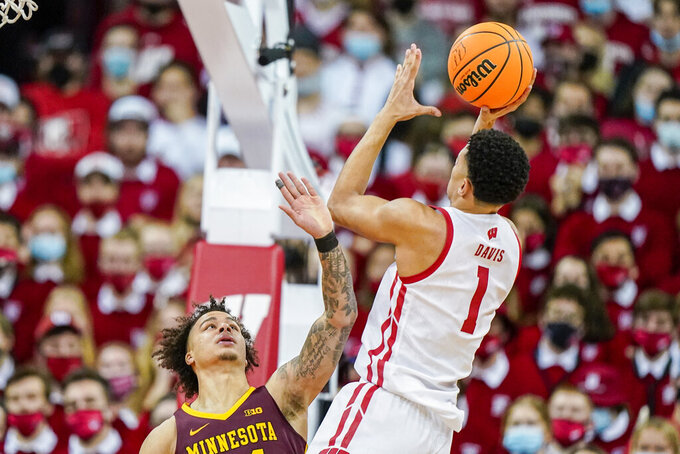 MADISON, Wis. (AP) — After relying on a balanced attack for most of the day, Wisconsin knew exactly who needed to have the ball in his hands in the closing minutes of a tie game.

Davis scored the game’s final six points and finished with 16 to go along with a career-high 15 rebounds as No. 11 Wisconsin outlasted Minnesota 66-60 on Sunday.

Minnesota (11-7, 2-7) trailed by nine early in the second half before rallying behind Payton Willis, who scored 15 of his 17 points after halftime. The Gophers tied the game at 60-all on a pair of E.J. Stephens free throws with 2:23 left.

“I thought our guys battled,” Minnesota coach Ben Johnson said. “I thought there was a couple of times where we could have caved and it could have gotten bad and gone south, and it didn't. I thought we showed a lot of fight and resiliency."

But they couldn't slow down Davis when it mattered most. Davis put Wisconsin ahead for good by making a driving layup with 2:10 remaining.

“I was just thinking of getting a bucket at all costs,” said Davis, whose season scoring average dropped to 21.4. “At that point in the game, every bucket’s crucial. So I just made sure I delivered.”

After Willis missed a 3-point attempt with 1:48 left, Steven Crowl misfired from 3-point range on Wisconsin’s ensuing possession but Davis chased down the offensive rebound and drew a foul. He made one of two free throws to make it 63-60 with 55 seconds left.

Stephens missed a jump shot eight seconds later, and Davis got the rebound and hit a stepback jumper on the other end of the floor to make it 65-60. Davis completed the game’s scoring by hitting one of two free throws with nine seconds left.

“When the game’s on the line, we have a lot of confidence in him to make the right decision, whether it’s to go get a bucket or find somebody or get a stop,” Davison said.

Minnesota lost for the sixth time in seven games despite welcoming back Eric Curry, who missed three games with an ankle injury. Curry had eight points and six rebounds in 34 minutes.

Jamison Battle had 14 points and 10 rebounds. Stephens added 11 for the Gophers.

“We just didn’t get a couple of baskets and a rebound late,” Johnson said. “It was kind of the ballgame right there.”

Wisconsin got 15 points from Tyler Wahl, 14 from Davison and 11 from Crowl. Davison and Wahl helped the Badgers take command early on, as Davis scored just two points in the game's first 15 minutes.

But once the game got tight in the final minutes, the Badgers knew it was time for Davis to take over.

“It's not rocket science," Wisconsin coach Greg Gard said. "You have a really good player, you give him the ball.”

Wisconsin tied the all-time series with Minnesota at 104-all, not including games that were vacated. This marks the first time since 1973 that Minnesota hasn’t led the series.

Wisconsin committed just seven turnovers and had a 13-4 edge in points off turnovers. The Badgers average just 8.5 turnovers per game and entered the day leading all Division I teams in that category.

Minnesota: The Gophers had an inspired effort on the road, but they couldn't make plays down the stretch as their January swoon continued. Their only win this month was a 68-65 triumph over Rutgers on Jan. 22.

Wisconsin: The Badgers improved to 10-1 in games decided by six points or fewer. They now face a tough part of their schedule with trips to Illinois, Michigan State and Indiana looming over the next 2 1/2 weeks.

Wisconsin went 2-0 this week, which could be enough to get the Badgers back in the top 10.

Wisconsin: At No. 24 Illinois on Wednesday.

Minnesota: Hosts No. 6 Purdue on Wednesday.