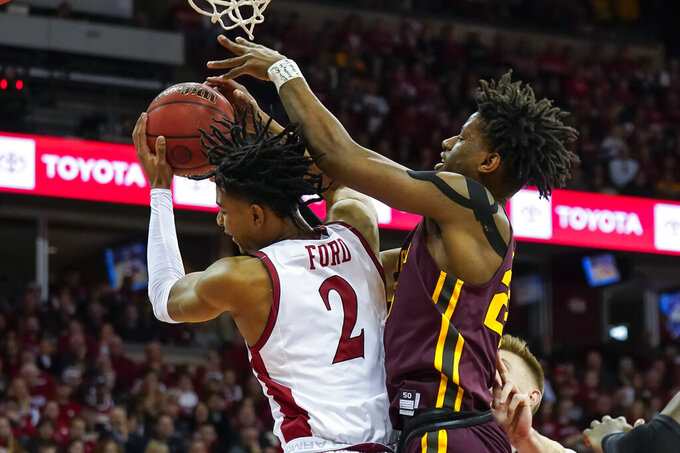 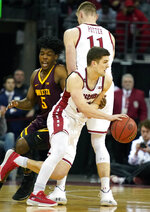 MADISON, Wisc. (AP) — A little more than a month into the season, Wisconsin was 5-5.

With a week to go in Big Ten play, the Badgers are one game out of first place.

It wasn’t always pretty. Still, coach Greg Gard said it was emblematic of the grit his team has shown this season. Months before the season began, assistant coach Howard Moore was badly hurt in a car accident that killed his wife and one of his children.

Meanwhile, Micah Potter -- now a key reserve -- lost his appeals with the NCAA for immediate eligibility after transferring from Ohio State and couldn’t play until Dec. 21.

Then in late January, second-leading scorer Kobe King announced he was transferring.

But the Badgers (19-10, 12-6) have now won six straight and sit in a three-way tie for second place in the conference.

“This group has gone through more than any team that I’ve been around in 30 years, and I couldn’t be more proud of what they’ve accomplished to this point,” Gard said. “The neat thing is they want more.”

Last week, it was blowing a 17-point lead over Maryland, which hit a 3-pointer with 1.9 seconds left to beat the Gophers. This time, it was watching a tough bounce and missed free throws sink their chances.

Davison missed a 3, but Aleem Ford tipped the rebound to the perimeter, setting off a scramble for the ball. D’Mitrik Trice came up with it, drove toward the top of the key and found Pritzl in the corner for a wide-open 3 that put the Badgers up 67-66 with less than a minute to go.

After giving up the lead on the next possession, Trice helped put the Badgers up for good with another good find, hitting a cutting Ford for an open dunk with 30.5 second left to grab a 69-68 lead.

Ford said Pritzl suggested the play during a timeout.

“That’s just a play that we had in the back of our pockets, and we executed it,” Pritzl said.

The Badgers had trouble stopping Daniel Oturu in the paint, where the Gophers had a 34-24 scoring advantage, and defending Marcus Carr’s straight-line drives. Oturu led Minnesota with 26 points and 12 rebounds, while Carr added 21 as they often carried the Gophers’ offense down the stretch.

But they couldn’t put them over the hump.

After that Ford dunk, Oturu went into the post and backed down Nate Reuvers, who blocked Oturu's shot. Pritzl grabbed the rebound, was fouled and then sank both free throws for a 71-68 lead.

The Gophers then got four free throws, but could only connect on one. Carr was fouled on the perimeter before missing both of his. Oturu was then fouled in the scramble for the rebound, hitting one.

Potter was fouled rebounding the second miss, but he failed to connect on either free throw attempt. That left the door open for Oturu to dribble to half court for a desperation heave that was well off the mark.

Minnesota coach Richard Pitino said other than losing Ford on his dunk, the Gophers competed down the stretch, unlike in the loss to Maryland.

“I thought they grew down the stretch,” Pitino said.

RIGHT IN FRONT OF THEM

With Maryland leading the conference at 13-5, Wisconsin closes out the regular conference season at home against Northwestern on Wednesday before traveling to Indiana on Saturday.

Potter said the Badgers’ mindset is simple -- just win and let everything else work itself out.

“Obviously, we all know where we’re at in our standings,” Potter said. “But like I said, all we can do is control what we can control.”

Minnesota: The Gophers have now lost five of six, the last two in heartbreaking fashion.

Wisconsin: The Badgers lost only one game in February, at Minnesota. They have now reeled off six straight wins.

Minnesota: Travels to Indiana on Wednesday.