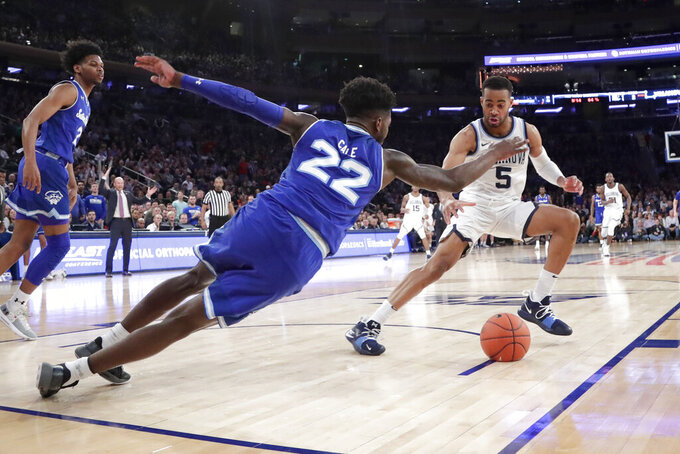 HARTFORD, Conn. (AP) — Villanova is coming into the NCAA Tournament this year from an unfamiliar angle.

The defending national champions bring the cache that comes with two NCAA titles in the last three seasons, along with a couple of key senior leaders who have a wealth of postseason experience and, of course, their famously sharp-dressed coach.

Beyond that much has changed.

Villanova is a sixth seed in the South Region, facing 11th-seeded Saint Mary's on Thursday night in Hartford. Not too far away from their Philadelphia home, the Wildcats will likely be well-supported in Connecticut. But for the first time since the 2013 tournament, Villanova is not a No. 1 or 2 seed.

"It's different," Villanova coach Jay Wright said Wednesday. "I don't think we'd be honest if we didn't admit to that, you know? But it's not bad, you know?"

Villanova had four players drafted off of last year's team, which buzz-sawed through the field to win the school's third title overall and second under Wright. The rebuild this season was made more difficult because a couple of last year's departures were unexpected. Donte DiVincenzo entered the draft after he rocketed to stardom in the tournament. Omari Spellman, a big man with range, also jumped into the draft earlier than most expected.

That left fifth-year senior guard Phil Booth and senior forward Eric Paschall to lead the way on a team that otherwise had very little experience. There were plenty of growing pains: A loss at Penn in December, followed by another loss at Kansas. In February, Villanova had a string of three straight Big East losses and four in five games. The Wildcats had not lost more than four conference games in a season since 2012-13.

"So the journey for this team has been different this whole year," said Booth, who leads the team at 18.6 points per game and 3.8 assists.

Villanova did win a third straight Big East Tournament title last week, getting key contributions from some of the younger players such as sophomore Jermaine Samuels and freshman Saddiq Bey who the seniors have tried to bring along.

"It's been a challenge, of course, but I definitely feel like we've embraced it," said Paschall, who averages 16.5 points and 6.2 rebounds.

The Wildcats are still a team that leans heavily on the 3, though not with the same efficiency they have in recent years.

Saint Mary's, fresh off an upset of top-seeded Gonzaga in the West Coast Conference championship game, has been playing stingy 3-point defense recently. In winning seven of eight, the Gaels have allowed opponents to shoot 27 percent from the 3-point line. The run started after a humbling 48-point loss to Gonzaga in early February.

"We took it pretty bad after Gonzaga a few weeks back, and got in the film room and on the court as well, and it was a real conscientious effort to just lift intensity," Gaels center Jordan Hunter said.

Saint Mary's coach Randy Bennett is in his 18th season leading the Gaels. They haven't quite kept pace with Gonzaga in the WCC, but they have clearly been the No. 2 team in that conference for a while.

The last time Saint Mary's and Villanova met was in the 2010 NCAA Tournament and the 10th-seeded Gaels upset the No. 2 seed Wildcats.

"That was probably the biggest win in Saint Mary's program history," Bennett said "It kind of came out of nowhere."

Third-seeded Purdue is built around the playmaking and scoring of guard Carsen Edwards, and lately he has been missing a lot more than he has been making.

Heading into the Boilermakers' first-round matchup with Old Dominion, the champions of Conference USA, Edwards is 6 for his last 33 from 3-point range. He has also been dealing with a back issue, but he again downplayed that Wednesday.

"I'm OK," the junior said. "Just taking it day by day, just trying to get treatment and things like that. I don't want it to be a big deal or anything like that."

Edwards averages 23 points. Ryan Cline is the team's second-leading scorer at 11.9. Edwards is not the most efficient scorer, but his shooting percentages this season have dropped from 45.8 percent from the field to 38.6 and 40.6 percent from 3-point range to 33.5.