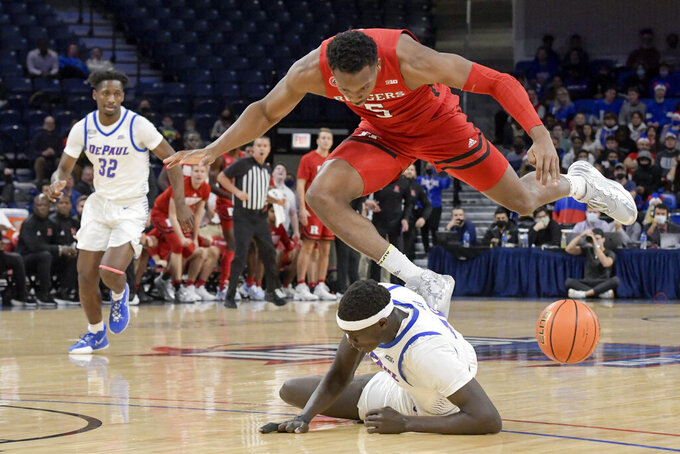 Rutgers' Aundre Hyatt (5) flies over DePaul's Yor Anei (10) as the two tumble to the floor while going after the ball during the first half of an NCAA college basketball game Thursday, Nov. 18, 2021, in Chicago. (AP Photo/Mark Black)

Jones made two foul shots with 25 seconds left to give the Blue Demons their three-point lead. Unable to get a shot off, Rutgers used its final timeout with 11 seconds to go.

Off a set a play, Geo Baker came off a screen but his contested 3-pointer bounced off the back of the rim. Brandon Johnson secured the rebound for DePaul and was immediately fouled. He missed two foul shots with 3.8 seconds, but Aundre Hyatt rebounded in traffic and his desperation heave never made it to half court.

Philmon Gebrewhit scored 11 and Johnson finished with nine points and 13 rebounds for DePaul.