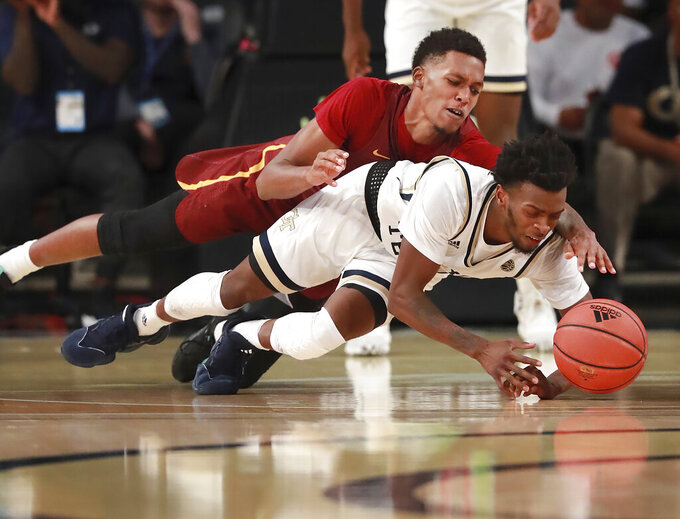 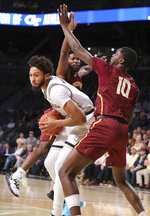 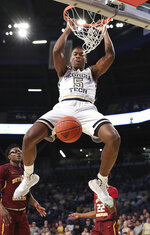 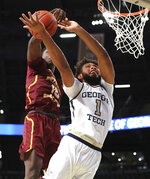 ATLANTA (AP) — Michael Devoe was hardly surprised when his number was called late Sunday night, and he delivered with a three-point play with seven seconds left to push Georgia Tech to a 68-65 win over Bethune-Cookman as the Yellow Jackets survived dreadful free throw shooting.

The sophomore guard, who is the most highly-regarded recruit that Tech head coach Josh Pastner has landed in four years, drove the left side and banked a short shot off the backboard.

That wasn’t new. He’s averaging 23.5 points per game. Then, he made his free throw, which was uncommon in a game where the Yellow Jackets (3-2) made just 9-of-19 in the second half to give the Wildcats (5-3) hope for one of the biggest upsets in program history since transitioning to Division I in 1980.

“Coaches drew up a play. I’m confident in myself, my teammates are confident in me as well and I made a great play to win the game,” said Devoe, who made 11-of-16 shots, including Tech’s only two 3-pointers.

Bethune-Cookman led 36-34 at halftime, and the teams traded the lead several times through the second half before Devoe’s critical score.

Pope tied the game for the final time with 31 seconds left when he grabbed an offensive rebound off a Malik Maitland miss and dunked in one motion.

He grabbed a whopping 11 offensive rebound on a night when the Wildcats had 20. Pastner suggested that Tech did a poor boxing of boxing out Pope when Jackets center James Banks III went to block shots, which was often. The senior had 12 points, 10 rebounds and a career-high eight blocks.

“I’ve never coached somebody like him,” Ridder said. “He’s got a great motor, number one. He plays really hard. He’s really wiry and strong. He’s got a great second bounce. He’s just relentless. When the shot goes up, it’s like an all-you-can-eat buffet. He wants as much as he can get.”

Moments after Pope’s final dunk, Tech took a timeout and the Jackets then ran clock before Devoe drove for the winning score. Pope fouled out on the play, and Devoe made the free throw shot to close the scoring.

A 3-point shot by Bethune-Cookman’s Leon Reed bounced high off the rim as time expired.

Tech’s Moses Wright had 12 points and 12 rebounds for the junior’s first career double-double. Isaiah Bailey scored 14 for the Wildcats, but just three in the second half when he made 1-of-6 shots.

Bethune-Cookman controlled early action, moving to a 20-10 lead on Bailey’s 3-point shot from the top with 10:30 left in the first half as the Wildcats were hardly puzzled by Tech’s 1-3-1 zone defense. That basket came off a pass from Maitland following on offensive rebound.

Bethune-Cookman: The Wildcats out-rebounded Tech 40-32 but couldn’t carry their hot shooting from the first half to the second, when they made just 11-of-38 shots after dropping 15-of-30 before intermission.

Georgia Tech: The Jackets were out of sorts early, and that probably had to do with the fact that junior point guard Jose Alvarado missed his third straight game with a severely sprained ankle, and Banks did not start for what Pastner said was, “just an internal matter.” Banks first entered the game with 13:44 left in the first half and in the second half had 10 points, seven rebounds and seven blocked shots.

Georgia Tech probably won’t play a more experienced team than Bethune-Cookman, which starts four seniors and plays six. Seniors accounted for 53 points and 35 rebounds, and they give hope to the Wildcats that they might earn the first NCAA Tournament bid in program history. “Those six seniors have thrown out their egos,” Ridder said. “They have one mission and that’s to get better every day and find a way to win.”

Bethune-Cookman: The Wildcats will play the fifth of eight consecutive games away from home on Tuesday night at Stetson.

Georgia Tech: The Jackets will play host to Nebraska on Wednesday as part of the Big Ten-ACC Challenge.