Dick Vitale returns to court, gets recognized at SEC tourney 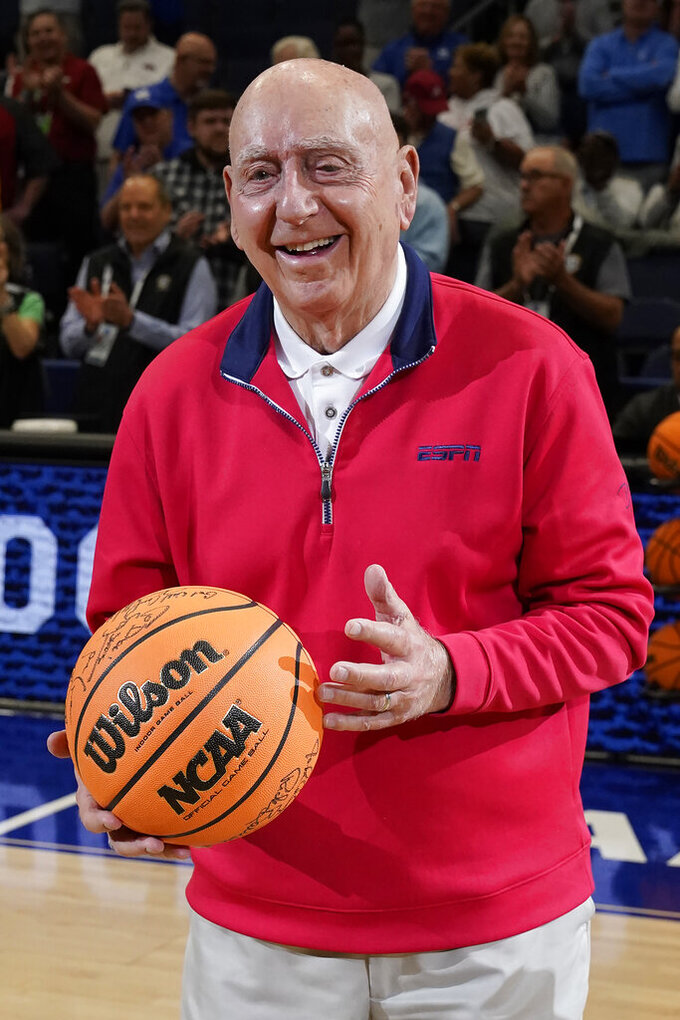 College basketball icon Dick Vitale made an appearance at the Southeastern Conference Tournament on Saturday, getting recognized for his contributions to the sport, the league and his fight against cancer.

Vitale, who lives about an hour south of Tampa in Sarasota, was presented a basketball signed by the SEC's 14 coaches before the first of two semifinal games at Amalie Arena. Vitale walked into the venue amid a standing ovation — and shouts of “Dickie V!” — and accepted the autographed ball from league Commissioner Greg Sankey at midcourt. He made a brief stop at ESPN's broadcast seats, the spot he held for decades before stepping back for health reasons.

Vitale, 82, has been public about his treatment for assorted medical issues, including at least two forms of cancer.

He hadn't made an in-person appearance at a college basketball game since calling reigning national champion Baylor’s 57-36 victory against Villanova in mid-December. Shortly thereafter, doctors put him on voice rest upon discovering precancerous dysplasia on his vocal cords that required surgery.

Vitale said in the fall he had been diagnosed with lymphoma, months after multiple surgeries to remove melanoma. He has chronicled his treatments and recovery on social media, posting photos of doctor visits and hospital stays while issuing motivational tips recorded before he was put on voice rest.

Vitale has been with ESPN since 1979, the year the network launched. He called ESPN’s first college basketball broadcast.

For nearly as long as Vitale has been a part of college basketball, he has been fighting against cancer. He helped Jim Valvano to the ESPYs stage where Valvano delivered his iconic “Don’t give up” speech.

A prominent fundraiser for children’s cancer research, Vitale is planning his 17th annual Dick Vitale Gala in early May in Sarasota. The event has raised more than $50 million for the V Foundation for Cancer Research.