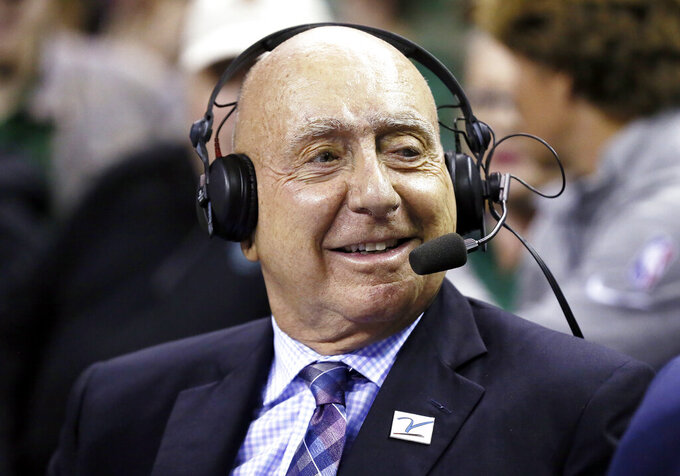 Dick Vitale is taking an extended break from the airwaves to rest his voice.

The ESPN college basketball analyst said in a story posted Wednesday to ESPN Front Row that on a recent visit to Massachusetts General Hospital in Boston, throat specialist Dr. Steven Zeitels advised him to rest his voice because he has pre-cancerous Dysplasia of the vocal cord membranes.

“The good news is that he doesn’t believe anything is life-threatening," the 82-year-old Vitale said. "Bottom line is I need to rest them -- my voice needs a T.O., BABY!”

Vitale has undergone treatment this year for melanoma and announced in August that was declared cancer-free. In October, he announced that he had been diagnosed with cancer for a second time. The Basketball Hall of Fame announcer said tests showed he had lymphoma and the treatment plan involved steroids and six months of chemotherapy. He was told by medical experts that there is a 90% cure rate and he had planned to manage his work schedule around his chemotherapy schedule.

Because he will be away from college basketball broadcasts, Vitale said he didn’t want people to fear that he had a setback in his cancer recovery.

“Of course, I am heartbroken that I won’t be immediately sitting courtside doing what I love, yet I’m in this for the long run,” Vitale said. "I plan to do games when I’m 100 -- I need to listen to Dr. Z!”

Vitale joined ESPN less than four months after it launched in September 1979. He has been a longtime supporter of the V Foundation for Cancer Research and hosts a yearly gala for pediatric cancer research.