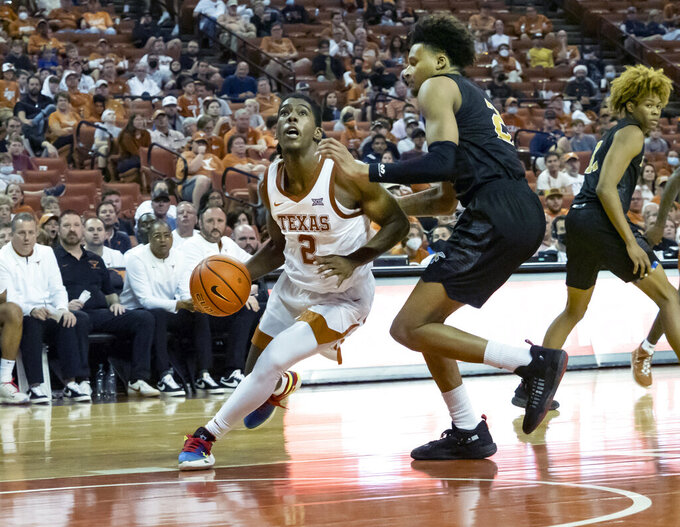 AUSTIN, Texas (AP) — Eight minutes into a game that No. 16 Texas was supposed to win easily, the Longhorns trailed Alabama State by nine points.

Then Dylan Disuelevated for an emphatic dunk over one of the Hornets. Disu showed that he is getting closer to full recovery from knee surgery in February, when he was on the team at Vanderbilt. He also might have proved a point that Texas coach Chris Beard made.

“Some coaches say a dunk is just two points,” Beard said. “I've never been one of those guys. You can change momentum.”

Disu surely did his part. He scored 10 points in the first half and 14 in the game to go with three blocks as Texas pulled away in the second half to defeat Alabama State 68-48 on Wednesday.

Gerald Liddell, a former Longhorn who transferred to Alabama State this season, led the Hornets with 16 points. Juan Reyna added 10.

Texas (9-2) and Alabama State were not scheduled to face each other until their original opponents this week experienced COVID-19 issues.

Disu, for one, needed the work that the makeup game afforded him. He was averaging 15 points and leading the Southeastern Conference with 9.2 rebounds a game when his season ended eight games earlier than Vanderbilt's did. He missed the first eight games this season, has played in the last three, and says he feels more comfortable each time out.

“Every game I felt better from a stamina standpoint,” Disu said. “I think you can tell from my explosiveness. I was a great player before I got here, and I need to continue to be that player.”

Alabama State was without coach Mo Williams, whose wife, Antonia, is due to give birth.

They looked fine without him early, making some difficult shots while taking a 13-2 lead. Texas missed six of its first seven shots and appeared tentative, committing five turnovers in the first six minutes. Then the Longhorns hit six of their next eight shots, working their way to a 29-25 halftime lead.

Texas hit just 7 of 24 3-point shots (29.2) percent in the game, and Alabama State wanted the Longhorns taking those.

“We wanted to force them to play from the outside,” Alabama State assistant coach Trey Johnson said. “We know they are pretty good operating in the paint.”

The Longhorns did create some separation with a 10-0 push early in the second half that included a pair of 3-pointers by Carr.

Alabama State: The Hornets rank 346th nationally in turnovers, committing nearly 18 a game. Texas ranks 18th in turnovers forced, also 18 a game. Somewhat predictably, Alabama State lost the ball 20 times against Texas, 10 in each half. Texas induced four charging fouls in the first half. “One thing I said coming into the game was, if they force us into 20 turnovers, they are probably gonna win,” Johnson said.

Texas: The Longhorns continue compiling wins against inferior opponents. Alabama State is the third Texas victim below No. 300 in the NCAA Net Rankings. The Hornets are No. 309. (Rice is No. 160). Next up is No. 339 Incarnate Word.

“We've got really good shooters,” Beard said. “I see good, open shots. (But) we have good shooters turning down open shots. I don't think that's the worst problem in the world because it shows that our guys are trying to play team basketball.”

Alabama State: At No. 25 Texas Tech on Tuesday.