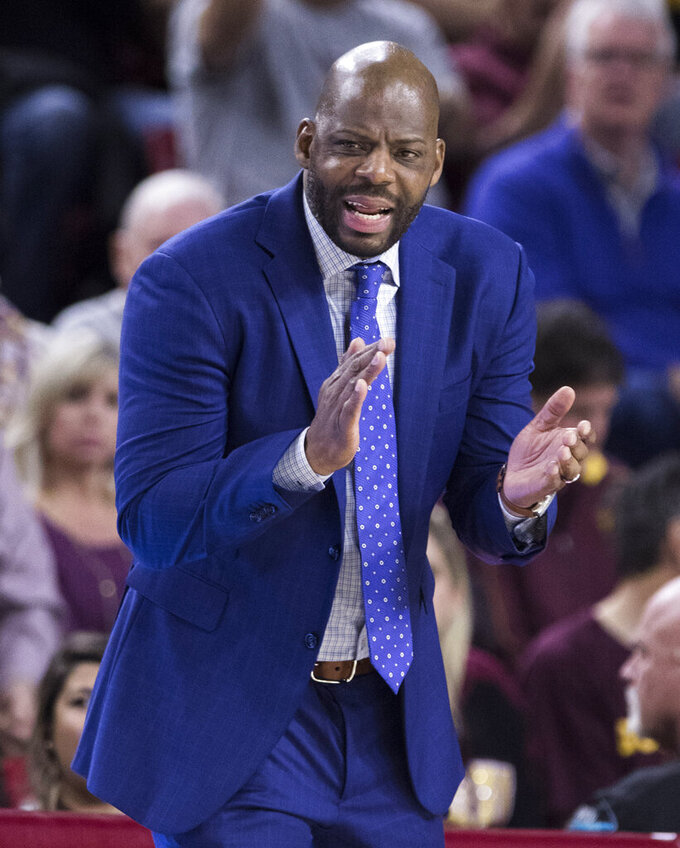 California head coach Wyking Jones encourages his team as they comeback against Arizona State during the first half of an NCAA college basketball game Sunday, Feb. 24, 2019, in Tempe, Ariz. (AP Photo/Darryl Webb) 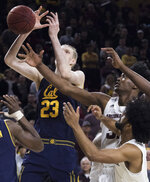 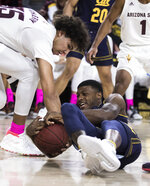 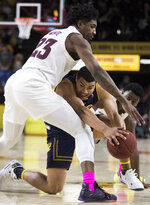 Arizona State came out hot in the second half, putting together a 28-10 run over the first 12-plus minutes to take a 12-point lead. The Sun Devils shot 16 of 28 from the field, including 4 of 7 from 3-point range, after halftime.

"I thought it was a great response in the second half the way the guys played and performed at both ends of the floor," said Arizona State head coach Bobby Hurley. "Our approach was better. Our aggression was better without fouling. It looked like we were putting together consecutive determined possessions."

Edwards scored 14 of his 16 points in the second half to push the Sun Devils.

"Rob had an outstanding spurt on offense that really kind of gave us separation in the game," Hurley said.

Cal had staged a 20-7 run to close the first half and go into the break leading 34-28. During that stretch, Grant Anticevich hit both of his 3-pointers and Matt Bradley added five points.

Bradley finished with 23 points, hitting 5 of 7 from 3-point range, and 10 rebounds.

"A lot of things went against us at the end of the first half that were a little unfortunate," Hurley said. "We had to come with the deficit when it could've been a lot closer and we overcame that."

Zylan Cheatham, the Pac-12's leading rebounder, finished with eight points and 12 rebounds. He's second in the conference with 11 double-doubles this season.

"I really wanted to get my 10 points to be honest," he said with a laugh.

Cheatham and De'Quon Lake were honored before the game in the team's senior-night ceremony. Sunday was Arizona's last home game of the season, as they'll play the final three on the road.

"Emotionally, I was pretty good at first, once the tribute video and the crowd gave me a standing ovation I couldn't hold back the tears," Cheatham said.

"It was very emotional. It was very special, the crowd was very awesome," said Lake, who finished with eight points and four rebounds.

On his way off the court, Cheatham took time to sign autographs and take pictures with fans.

"It's a surreal moment. I'm the type of person, I get chills when someone knows my name without introducing myself," the Phoenix-native said. "That five, 10 minutes, is the least I can do."

"Not everyone has a real impact on a program the way he has," Hurley said. "It's immeasurable what he's meant to me for two years. The way he worked, the way he pushed the guys, his attitude, his personality. He plays with heart and his soul and his emotion."

Cheatham transferred from San Diego State after his sophomore year and sat out the 2017-18 season, per NCAA rules.

Cal had a six-point lead over the Sun Devils at the half. The last time the Golden Bears led at the half was against UCLA on Feb. 13. They ended up losing to the Bruins 75-67, in overtime.

Arizona State picked up its tenth conference win to take possession of second in the Pac-12 standings. It's the first time the Sun Devils have reached the 10-win plateau since 2013-14 and the first under Bobby Hurley.

Cal has three games left to prevent a winless conference season. Twice the Golden Bears have gone 1-11, in 1948-49 and 1954-55. The Golden Bears extended their various losing streaks to 16 straight overall, 23 straight in conference play and 18 straight on the road.

Cal will continue to seek its first Pac-12 win as it returns home to face conference-leading Washington on Thursday night. They'll finish their double-dip at home Saturday against Washington State.