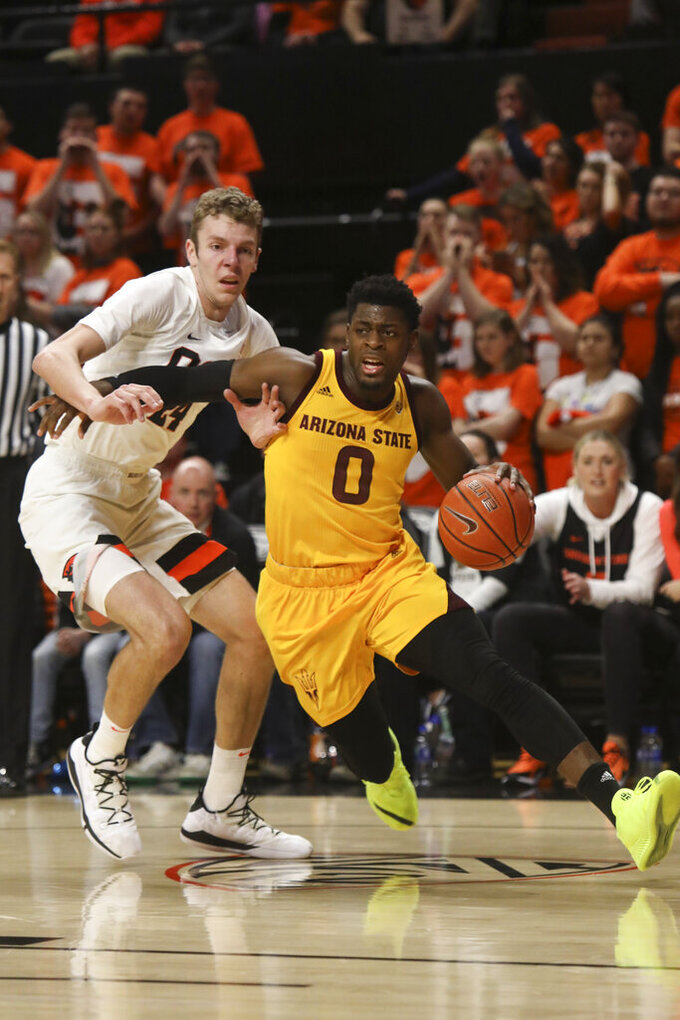 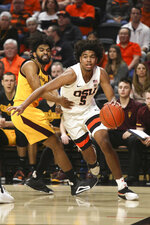 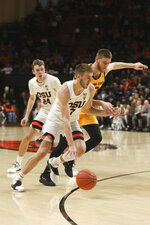 "It's rare that you see a freshman that never gets rattled. He's got a very cool customer way about him," Hurley added.

Dort had 20 points with four 3-pointers — knocking down a clutch long range shot and free throws in the final minute — as Arizona State came back in the second half to beat Oregon State 74-71 on Sunday night.

"I just felt I had confidence to step up in this big game," Dort said.

"A tough one that we're going to have to bounce back from here as we head into the last week on the road and prepare for the (Pac-12) tournament," Oregon State coach Wayne Tinkle said.

The Beavers ended the first half on an 8-0 run to take a 37-30 lead at the break. The surge included a block by Kylor Kelley that led to a fast break dunk by Tinkle.

The Sun Devils outscored the Beavers 15-4 to open the second half, however, and went ahead 45-41 after a 3-pointer by Edwards with about 15 minutes remaining.

The game turned into a back-and-forth affair.

Tinkle responded with a layup 10 seconds later to make the score 71-69. After a Sun Devils miss, the Beavers had the ball with 20 seconds left, but Stephen Thompson Jr. missed a layup.

Edwards was fouled after securing the rebound and made 1 of 2 free throws. Ethan Thompson was then fouled by the Sun Devils with five seconds left. Thompson made both and the Beavers trailed 72-71.

The Beavers fouled and sent Dort to the line with 3.7 seconds left. Dort sank both, and a desperation heave by Oregon State was off the mark.

Arizona State: Taeshon Cherry didn't play in the second half after apparently getting hit in the head in the first half. . The Sun Devils were in foul trouble much of the night. De'Quon Lake fouled out. Martin and Romello White each finished with four fouls. ASU coach Bobby Hurley, clearly unimpressed with the officiating, got called for a technical with 12:17 remaining.

Oregon State: The Beavers celebrated their seniors, Stephen Thompson Jr. and Gligorije "Big G" Rakocevic, during their final regular season home game. Rakocevic got his seventh start of the season. . Ethan Thompson finished one assist shy of joining elite company in OSU history. Oregon State's only triple-doubles in history came from the same family. Gary Payton had a triple-double against Portland on Nov. 26, 1988, and his son Gary Payton II had a triple-double against Grambling State on Dec. 15, 2014.

DORT DEFENSE: Hurley said he has immense confidence in Dort's individual defense. "It's something that we noticed when we first recruited him. . He takes a lot of pride at that end of the floor and he's got the tools to do it," Hurley said.

PHYSICAL D: Wayne Tinkle said that the Sun Devils' aggressive defense put the onus on the officials to call fouls. "They're one of the more physical teams; they climb up into you everywhere," he added.

FIRST ROUND BYE: The Arizona State win came on the heels of a 79-51 loss to Oregon that was so bad Hurley didn't even review the game tape with his squad. "This game was a pivotal game for a lot of reasons, especially seeding in the Pac-12," Hurley said. The Sun Devils secured a first round bye and the No. 2 seed at the Pac-12 tourney.

Arizona State: At Arizona on Saturday.

Oregon State: At Washington on Wednesday.