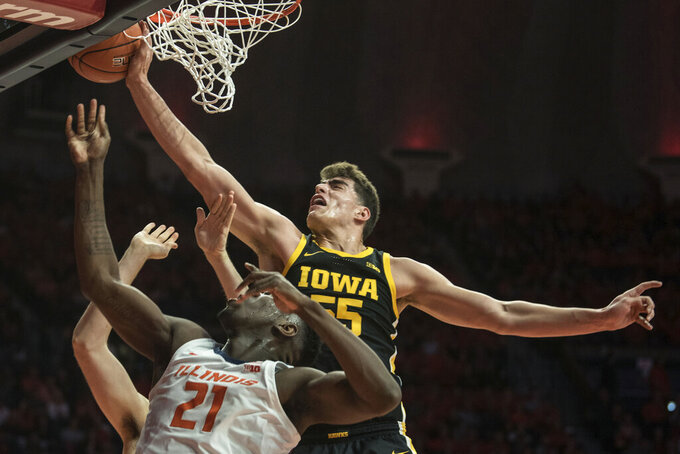 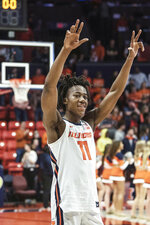 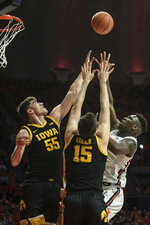 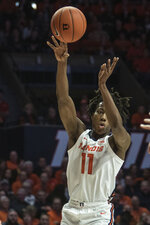 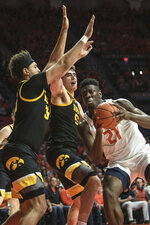 CHAMPAIGN, Ill. (AP) — The rivalry between Illinois and Iowa is heating up.

“I mean, there’s a respect factor, but on the court it’s pure hate,” Dosunmu added. “We just don’t like each other.”

Luka Garza scored 28 points for Iowa (20-11, 11-9), which finished in a four-way tie for fifth in the Big Ten and will be the No. 5 seed in the tournament. Joe Toussaint scored 14 and Connor McCaffery added 10.

“I mean, we don’t condone this whole hate thing,” he said. “I think that’s just the guys on the court. But overall, rivalries are awesome. They are great for sports and college basketball. The players love it, and the fans love it.”

Illinois built a 17-point lead late in the game, using a 12-2 run to take a lead it wouldn’t relinquish. But that lead evaporated to two points in the final seconds and it took Cockburn blocking a shot by Garza under the basket at the buzzer to seal the win.

Cockburn was a big presence for Illinois, scoring nine points in the first 10 minutes. Defensively, the Illini had problems getting stops early and Iowa’s Garza took command both in the paint and from the perimeter.

Emotions ran high throughout the game. With less than two minutes left in an entertaining first half, a scrum erupted that resulted in technical fouls for Illinois’ Trent Frazier and Da’Monte Williams and Iowa's McCaffery and CJ Fredrick.

“There are very few guys that can play 40 minutes with that kind of intensity,” Iowa coach Fran McCaffery said. “I really admire him.”

Cockburn, who blocked Garza under the basket at the buzzer to save the game for Illinois, was also impressed by Garza.

“It’s actually a pleasure to play against him,” said Cockburn, a 7-foot freshman. “I learn from him and I try to match his energy.”

Asked if his block of Garza was the best of his career, Cockburn grinned. “Well, it was a game-winning block, so yeah, I’d say it’s the most important block of my career for sure.”

“There was a lot of emotion out there,” McCaffery said. “That happens every day in every game in this league. We have quality teams and quality players, so that’s to be expected.”

The No. 4 seed gives Illinois another day of rest. The Illini got a double bye in the tournament, while Iowa will have to start a day earlier.