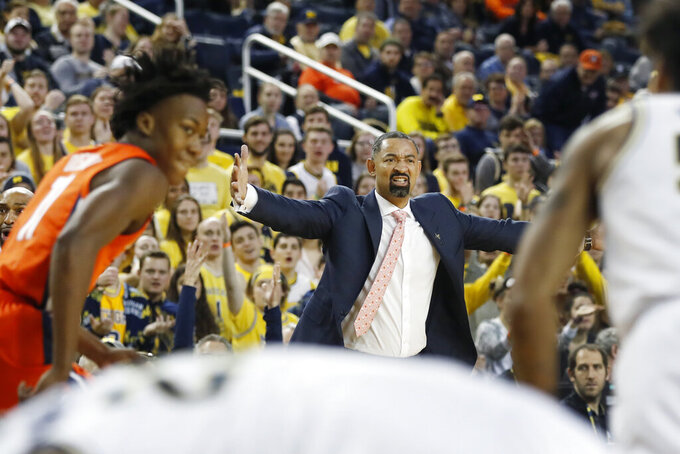 Michigan head coach Juwan Howard disputes a call after a play during the first half of an NCAA college basketball game against Illinois, Saturday, Jan. 25, 2020, in Ann Arbor, Mich. (AP Photo/Carlos Osorio) 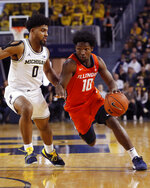 ANN ARBOR, Mich. (AP) — Ayo Dosunmu hit a contested jumper from the free throw line with 0.5 seconds remaining to give No. 21 Illinois a 64-62 victory over Michigan on Saturday.

The Illini (15-5, 7-2) moved into sole possession of first place in the Big Ten for the moment, and they extended their winning streak to six with a hard-fought victory over the Wolverines. Michigan (11-8, 2-6) has dropped four in a row and may have lost forward Isaiah Livers again to an injury.

With the score tied at 62, Illinois was able to run the clock down and isolate Dosunmu against Michigan's Zavier Simpson. Although the tenacious Simpson is one of the Big Ten's top defensive players, he is 5 inches shorter than Dosunmu, who was able to shoot over him.

Michigan had one more possession with under a second left, but the Wolverines didn't get a shot off.

Livers returned for Michigan after missing six games with a groin injury, but he left in the second half after appearing to hurt himself again. Livers was fouled during a dunk attempt — the same way he got hurt the first time — and came up holding his groin area. He did go back in at the very end to throw the long inbound pass for the Wolverines after Dosunmu's shot.

Illinois: It's been quite a run for the Illini, who won in Ann Arbor for the first time since 2010. Illinois was tied with Michigan State for first place entering the game. The Spartans have a chance to pull even again when they play Sunday.

Michigan: The Wolverines shot poorly to start the game and then missed several free throws at the end. They did a lot of other things right — Michigan turned the ball over only twice and contained Illinois on the boards — but this season is in danger of slipping away.

This is Illinois' highest AP ranking since it was No. 12 in January 2013, and this victory will probably move the Illini up.

Michigan: The Wolverines travel to play Nebraska on Tuesday night.