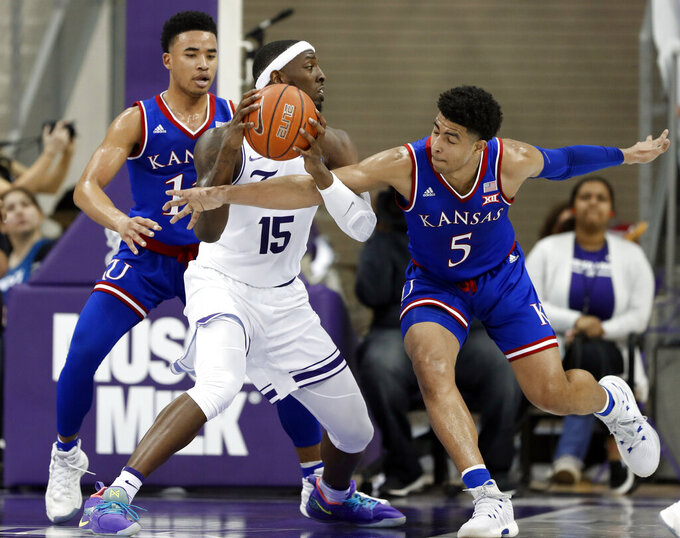 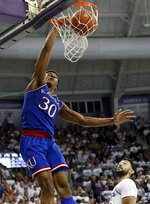 FORT WORTH, Texas (AP) — Even when Kansas won games earlier this season against three Top 25 teams, the Jayhawks hadn't celebrated in the locker room like they did after an overtime victory at TCU.

They are a much different team now than when they beat Tennessee, Michigan State and Villanova. Coach Bill Self and the Jayhawks are now starting four freshmen.

Devon Dotson, one of those freshmen, scored a season-high 25 points with six free throws in the final 40 seconds of overtime and No. 14 Kansas won 82-77 on Monday night after blowing a 12-point lead in the second half.

The Jayhawks (19-6, 8-4 Big 12) never trailed in overtime. They broke the final tie on K.J. Lawson's jumper with 1:09 left before Dotson sealed it at the free-throw line.

Dotson also had 10 rebounds for one of the three double-doubles for Kansas. Ochai Agbaji had 20 points and 11 rebounds, while Dedric Lawson, a junior and the only non-freshman starter, had 14 points and 10 rebounds.

"Devon was really tough, one of the toughest guys on the court," Agbagi said of the only player in the game for all 45 minutes.

"You can't take him out, and he got tired," Self said.

"A game we should have won," Desmond Bane, who led TCU with 18 points, said before pausing. "Should have won."

Dedric Lawson had a putback basket for the Jayhawks with 1:06 left, and they got the ball back after TCU freshman Kendric Davis lost it out of bounds. The ball was initially ruled off a Kansas player until a replay review.

K.J. Lawson tied the game on a floater with 24 seconds left, and Davis missed a contested shot at the buzzer that would have won it.

"Had our opportunities, had our chances," coach Jamie Dixon said. "Certainly in regulation, we were in position to win the game, but we didn't get it done. Defensively didn't finish it, two layups at the end to tie it up."

Davis finished with 16 points, while Kouat Noi had 14 and Alex Robinson scored 13 for the Frogs.

Kansas: The young Jayhawks got a big road win. After senior guard Lagerald Vick took a leave of absence from the program last week, Self used four freshman starters Saturday for only the second time in his 16 seasons. They won at Oklahoma State, rebounding from a loss at Kansas State, and overcome a raucous atmosphere in Fort Worth.

"We're not as good visually as what other teams we've had are. We made the game a lot harder on ourselves than what it is," Self said. "That doesn't mean we don't have a good team. ... We haven't hit our stride yet."

TCU: It was a stinging loss for TCU, which had won eight consecutive Big 12 home games. The Frogs were coming off a 92-83 win at then-No. 17 Iowa State on Saturday. They jumped out to a 7-0 lead in the first 1½ minutes against Kansas, and had the big run late before falling.

The fans sporting white T-shirts and the filled-to-capacity student section were in an early frenzy when Self was forced to call a quick timeout. The Jayhawks settled down and took their first lead after consecutive 3s by Dotson and Dedric Lawson to make it 14-12. That was the first of 10 lead changes in the first half, and the game was tied after a quick exchange of baskets right before the break. Robinson put TCU up 37-35 with 14 seconds left with a long 3-pointer over Quentin Grimes, who then finished the half with a tying jumper.

Kansas is home Saturday against struggling West Virginia, which beat the Jayhawks 65-64 on Jan. 19.

TCU hosts Oklahoma on Saturday with a chance for a regular-season series sweep of the Sooners.