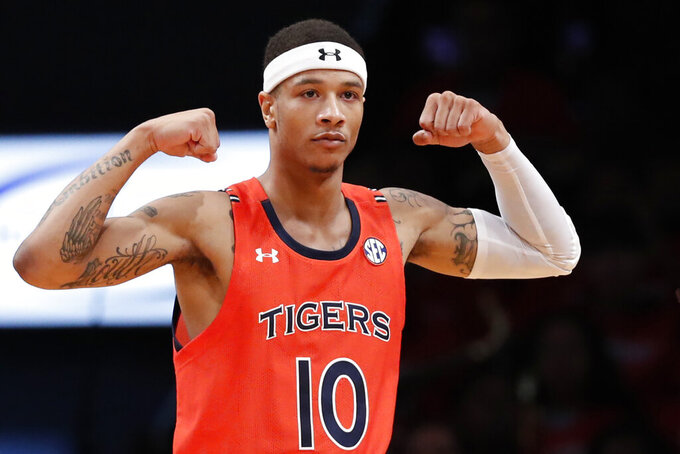 Auburn guard Samir Doughty (10) shows his muscles after scoring during the first half of an NCAA college basketball game against New Mexico in the Legends Classic, Monday, Nov. 25, 2019, in New York. Doughty was the high scorer for Auburn with 19 points as they defeated New Mexico 84-59. (AP Photo/Kathy Willens) 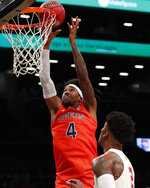 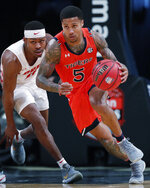 NEW YORK (AP) — The Auburn Tigers are an unfinished product in the eyes of Bruce Pearl. That should cause opposing coaches sleepless nights.

“We just have to keep getting better,” Pearl said after his No. 18 Auburn Tigers routed New Mexico 84-59 in the second game of the Legends Classic Monday night at the Barclays Center.

Auburn improved to 6-0 and will meet Richmond in the championship game Tuesday.

"(Coaches) love these tournaments," Pearl said. "We love these matchups. I personally think sometimes the best basketball (is played in) November (and) December because once you get into conference play it's a grind. They all know you. You're so well scouted. I just think these inter-conference matchups are great.

"Richmond can run stuff that we've not seen, and one day prep is (going to) be hard. Their stuff is going to work better. I'd call it getting exposed. And (when) you play another team that exposes your weaknesses you learn from them--you adapt in the game. If you can, you (have) a chance to win the game. If you can't, you adapt after the game and grow from it."

Auburn will enter the game having had four players finish in double figure scoring against New Mexico (5-2).

Samir Doughty scored 19 points. Austin Wiley had a double-double with 14 points and 13 rebounds. Isaac Okoro chipped in with 12, and Anfernee McLemore had 10.

Pearl pointed to his team's unselfishness as a significant part of its makeup. The Tigers finished with 18 assists, highlighted by Okoro setting up Devan Cambridge for a breakaway dunk midway through the second half.

"When you share the ball, it's contagious," Pearl said. "We got guys who can score, but I honestly think our guys enjoy letting the other guys score."

The Tigers' enjoyment left the Lobos licking their wounds. New Mexico lost for the second time in its last three games. Makuach Maluach led the Lobos with 14. Keith McGee had 13 and Vance Jackson contributed 10 points.

"I thought they had a lot of pop to them," New Mexico coach Paul Weir said of Auburn, "and unfortunately we looked the opposite. We (looked) like a team that has been on the road for the last week. Physically they do obviously have tremendous length and athleticism, but I just thought their overall pop was just better than ours and that obviously accentuated that difference."

The second all-time meeting between the Mountain West and SEC programs was a muscle-flexing for the Tigers. Auburn led by 31 in a second half which saw the Tigers relentlessly attack the rim. At one point, Auburn finished three straight possessions with dunks- two by Wiley and Okoro had the other.

The Tigers limited the Lobos to 40% shooting and forced New Mexico to miss on 15 of 19 3-point attempts. For Auburn, who came into the game allowing 68.2 points per game, being able to lock down an opponent can only bode well once conference play begins.

"Coach Pearl never (talks) to us about shot (attempts)," Doughty said. "He really (focuses) on defense. If we mess up when we go over (it) he stops the play and we're redoing it over and over. ...We just focus on defending each and every game.

"If we can defend, we should win a game, most likely."