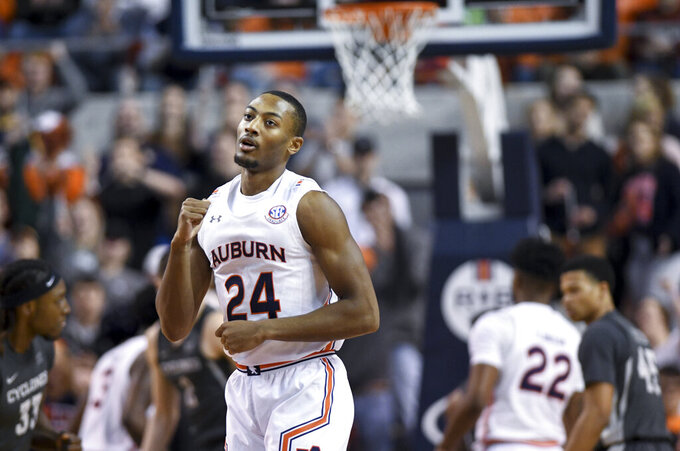 Auburn forward Anfernee McLemore (24) celebrates a 3-point basket against Iowa State during the first half of an NCAA college basketball game Saturday, Jan. 25, 2020, in Auburn, Ala. (AP Photo/Julie Bennett) 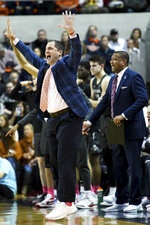 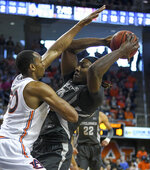 True freshman Isaac Okoro has a quiet confidence about him.

He doesn’t trash talk or boast, because as his Auburn teammates put it, he doesn’t need to.

“Nah, but he definitely backs it up every time,” guard Samir Doughty said when asked if Okoro says anything on the court. “If I was on the opposing team, he’s not someone I would want to guard.”

Okoro had 10 straight points to help the Tigers (17-2) take a 76-62 lead with under six minutes to play. The Cyclones (9-10) responded with 10 points in a row. Okoro hit two foul shots with nine seconds left to seal it.

“For Auburn to hold serve at home, we were the home team here, we were supposed to win this one. We did,” Auburn coach Bruce Pearl said. “That matters a lot to me that Auburn’s not holding the league down any longer in men’s basketball.”

After starting Wednesday night’s game against South Carolina 1 of 10 from the field and 0 of 4 from beyond the arc, Auburn got off to the fast start SEC teams have grown accustomed to seeing with Pearl’s offenses over the years.

The Tigers used a quick 12-2 run, hitting 4 of 8 3-pointers, to build a six-point lead at the first media timeout.

Auburn's guard play, which has been somewhat of a question mark for this year’s team with the departures of Jared Harper and Bryce Brown, was there. Guards J’Von McCormick and Doughty scored 8 of the team’s first 14 points.

“I thought J’Von, Samir and Isaac did a really good job getting downhill, getting to the rim and turning corners,” Pearl said. “That’s a big part of our offense, and I thought we finished at the rim better today.”

Auburn made nine 3-pointers in the first half, with Danjel Purifoy hitting shortly before the buzzer, in taking a 42-31 lead. The Tigers finished 10 of 28 from behind the arc.

Held to five points in the first half, Okoro shot 5 for 6 after the break.

“My teammates were getting me the ball, Samir, in transition, just finding me, getting me open shots,” Okoro said. “Being aggressive, going to the rim and trying to get to the free throw line.”

Said Doughty: “Everybody wanted the ball in his hands."

Rasir Bolton led the Cyclones with 23 points and Tyrese Haliburton, the team's leading scorer going into the game, added 12.

Iowa State: The Cyclones led the Big 12 in field goal percentage entering the day but were held to 36% from the field and only made 7 of 27 from beyond the arc.

“To hold a good offensive team to 36 percent is solid,” Pearl said. “That’s how you win.”

Auburn: This was the Tigers' first win in the Big 12/SEC Challenge since a victory over TCU two years ago. The Tigers have won 42 of their last 45 home games, dating to the 2016-17 season.