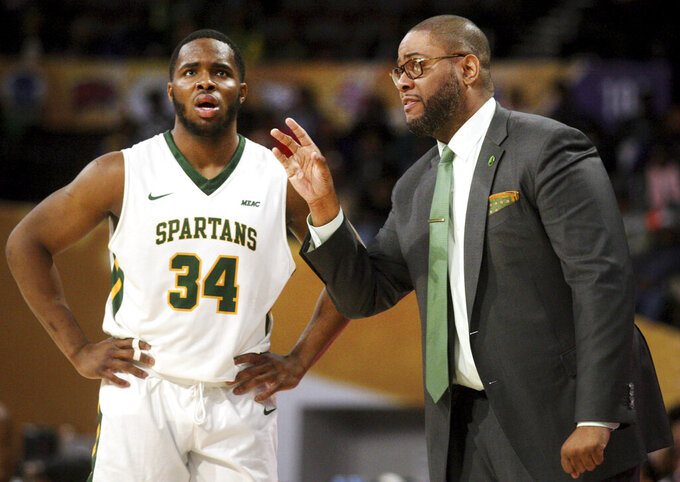 NORFOLK, Va. (AP) — North Carolina Central got no style points in winning its third consecutive Mid-Eastern Athletic Conference championship. Coach LeVelle Moton figured in advance that that might be the case: In a regular season meeting, Norfolk State beat the Eagles in overtime.

"Typical championship game," Moton said after his team's 50-47 victory against top-seeded Norfolk State on Saturday. "We knew we were going to be in for a dogfight. ... This is what we do it for, man."

Zacarry Douglas scored all 10 of his points during a 25-6 second-half run and the third-seeded Eagles (18-15) held on, earning their fourth MEAC title in six years and another trip to the NCAA Tournament despite missing nine of their last 10 shots and not scoring for the final 4:03.

"Defense wins games anyway," center Raasean Davis said. "As long as we were locked in on the defensive end and limited them to one shot, that was one of our man focuses."

Mastadi Pitt scored 14 points and C.J. Kelly 13 for Norfolk State (21-13). The Spartans had a last chance to tie, but after taking a timeout with 8.8 seconds left, they had to settle for a heavily contested desperation heave by Pitt at the buzzer.

"We wanted to win it and we've got another game, but it's rough right now," Pitt said. As regular season champions, Norfolk State will advance to the NIT.

The Spartans were 4 for 22 from the field in the second half.

"We shot 18 percent from the field and that's not going to win too many games," Norfolk State coach Robert Jones said.

The Spartans trailed 50-42 after Jibri Blount's basket for the Eagles with 4:03 left, but got only a driving basket by Steven Whitley and three free throws by Jordan Butler the rest of the way as they missed seven of their last eight shots.

"Even though we weren't scoring, we stopped them from scoring, so that helped us a lot," Davis said.

The Eagles became the first MEAC team to win three straight tournament titles since North Carolina A&T won seven straight from 1982-88. They will be seeking their first victory in the NCAA Tournament.

"If we get this win, we know it's going to be a dogfight," Douglas said.

N.C. Central: The Eagles turned over the ball 17 times, but it led to just 13 points for Norfolk State. The Eagles also won the rebounding battle 41-29 with Davis grabbing 14 and Douglas 12.

Norfolk State: Scoring leader Nic Thomas (14.9 points per game) was scoreless, missing all five of his shots from the field. Derrik Jamerson, the No. 2 scorer (10.6), also was scoreless and did not take a shot. A 51 percent 3-point shooter (86-166), Jamerson played only 11 minutes because of a foot injury aggravated in the semifinals on Friday night, Jones said.

Norfolk State: will play in the NIT as league regular-season champions.