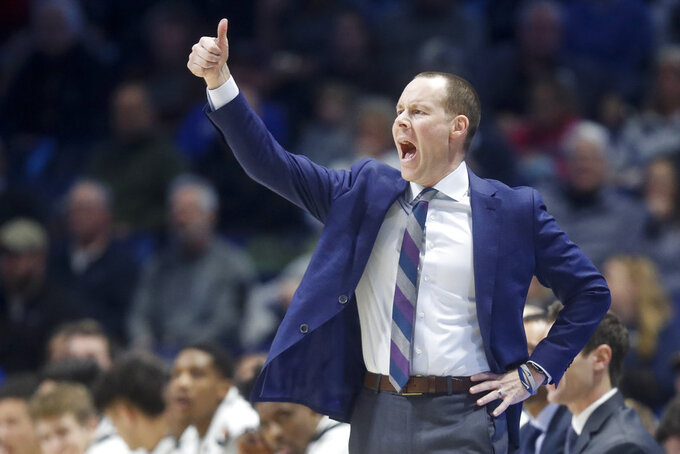 Xavier head coach Travis Steele directs his players from the bench during the first half of an NCAA college basketball game against Georgetown, Wednesday, Jan. 9, 2019, in Cincinnati. (AP Photo/John Minchillo) 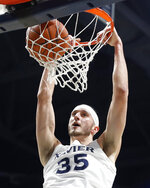 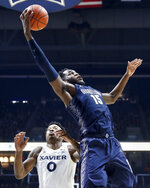 CINCINNATI (AP) — Zach Hankins and Tyrique Jones have been lobbying to play together on Xavier's thin front line. They got their chance and led the Musketeers to their best win of the season.

Hankins scored a season-high 23 points , and Jones had a double-double Wednesday night as Xavier rallied from a 17-point deficit to an 81-75 victory over short-handed Georgetown.

With the Musketeers trailing by 17 late in the first half, Hankins had a fast-break dunk and a reverse layup that sparked a 17-point run. Jones' 3-point play completed the run and tied it at 39-39. Jones finished with 19 points and 10 rebounds.

Hankins and Jones are the Musketeers' only post players. Coach Travis Steele has been reluctant to play them together, fearing they'd get in foul trouble. He gave them a chance on Wednesday and it worked out nicely.

"That's the first time you've seen it," Jones said, noting they've played together in practice. "It definitely felt great. We've been in coach's ear trying to stay on the floor, both of us at the same time. Today we proved we can both stay on the floor."

Paul Scruggs made a pair of free throws and a layup as Xavier pulled ahead by seven points and didn't trail again. Scruggs finished with 10 points.

Xavier point guard Quentin Goodin sat out with an injured right ankle, hurt during a 70-52 loss at No. 16 Marquette on Sunday.

Jessie Govan scored 27 points for the Hoyas, who were coming off a 97-94 loss to St. John's in overtime.

"We can't just continue to shoot 3s," coach Patrick Ewing said. "We shot 27 3s, they shot 13. They got the ball in the paint and we didn't. We should get the ball inside and out."

Xavier went to a zone defense late in the first half and the Hoyas had trouble getting the ball inside. Xavier finished with 48 points in the paint to Georgetown's 28.

"It was a great adjustment," Hankins said. "It immediately stopped their offense in their tracks."

Georgetown: The Hoyas' two injured starters are getting closer to returning, but weren't ready on Wednesday. Freshman guard Mac McClung missed the fourth straight game with an injured left ankle. Forward Trey Mourning missed his fifth straight with a concussion. Freshman Josh LeBlanc started in Mourning's spot for the fifth straight game and had four points.

Xavier: The Musketeers pulled off their best win without Goodin, who missed a game for the third time this season. He severely injured his left shoulder in the preseason and missed the opener. He missed a later game because of illness.

"I just loved the resolve of our guys tonight," Steele said.

In addition to their six straight wins over the Hoyas, the Musketeers have dominated the series 14-4.

Steele slammed his whiteboard on the floor during a timeout after Georgetown pulled ahead by 17 points, getting his team's attention. The Musketeers went on their 17-point run out of the timeout.

Malinowski came in shooting 48.9 percent from beyond the arc, best in the league. He made his first two 3-point attempts, but then missed his four shots the rest of the way.