Droughts over: Drexel, Rutgers lead charge back to NCAAs 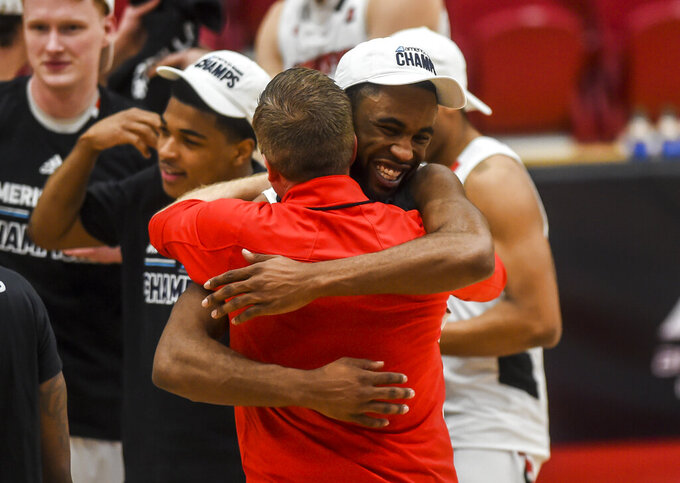 PHILADELPHIA (AP) — The last time Drexel basketball made more than local headlines, TMZ was on the scene because Philadelphia 76ers star Ben Simmons and model Kendall Jenner were in the bleachers for a game on the West Philadelphia campus.

The rest of Drexel’s tradition doesn't have a whole of March Madness in it. Spiker, though, had to cut off a suggestion that he took over a program in 2016 devoid of much hoops history, noting the Dragons did represent the North Atlantic Conference in the NCAA Tournament three straight years.

“Timeout. Timeout,” Spiker said by phone. “We won three straight titles from ‘94 to ’96. I mean, we beat Memphis in the tournament, you know?"

Long the outsider in Philadelphia’s rich basketball scene, the Dragons snapped that 25-year streak with a Colonial Athletic Association Tournament championship that earned them the No. 16 seed and a game against No. 1 Illinois on Friday.

Drexel is back in the bracket — and some long-forgotten teams have tagged along.

Remember Appalachian State? The Mountaineers have only two previous NCAA appearances — under coaches Bobby Cremins (1979) and Buzz Peterson (2000) — and ended a 21-year skid.

Those are drops in the 3-point basket compared to Rutgers making the field for the first time in 30 years.

One piece of advice seems universal: Enjoy the moment, and that applies as well to the two tourney newcomers (Grand Canyon and Hartford).

“At the high-major level, guys just want to get to the NBA. At our level, guys just want to play in the NCAA Tournament,” Appalachian State coach Dustin Kerns said. “And there is an element now of, ‘Hey, how can I get the NBA?’ But we told them when we got here, ’Hey listen, App State has been to the NCAA Tournament. This program has been twice. So if we can go before, we can do it again.'”

For every mid-major dreaming of blossoming into the next Gonzaga -- or pulling off a UMBC -- the reality is most of these one-bracket wonder programs fall back into obscurity and won’t pop up on Selection Sunday for years or decades to come.

That won’t stop the fun this weekend.

So when the Dragons clinched a berth in the face of the pandemic, the school partied like it was 2019. The Dragons returned to campus with a police escort and students lined sidewalks cheering them on. Drexel put up a big screen outdoors and threw a watch party with music, giveaways, and fire pits for the selection show.

“Even though it’s a pandemic, we want our guys to have an experience, and have a moment,” Spiker said. “By doing little things like that, we’re able to do that.”

Most of these teams weren’t in the NCAA mix last season when the tournament was canceled because of the pandemic. Rutgers, though, went 20-11 and seemed a safe bet to make the 2020 field before it was waved off the court moments before its Big Ten Tournament opener. The Scarlet Knights, who received a No. 10 seed, pushed forward this season with Ron Harper Jr., Geo Baker and Jacob Young to go 15-11 and end the drought.

“None of us were alive,” guard Paul Mulcahy said. “But there’s also been a lot of people who have supported the program for 30 years through the ups and downs. I’m just really happy for those people, that they finally get to experience this as well.”

Rutgers had a taste of March success in the 1970s under coach Tom Young when they played in four tournaments from 1975-1983 and reached the 1976 Final Four.

The playing field between perennial power programs with their Hall of Fame coaches and one-and-done first-rounders and everyone else was somewhat flattened this season. In other cases, it was finding the right coach.

Before Dennis Gates was hired in 2019, Cleveland State’s program had endured five straight seasons of at least 21 losses. The Horizon League champs went 19-7 and might lean on their postseason past when they play second-seeded Houston.

In 2009, the Vikings knocked off No. 4 seed Wake Forest in the first round. In 1986, they stunned Bob Knight’s Indiana team and made it to the Sweet 16 before losing to Navy on a last-second shot by David Robinson.

College athletics is big business and the boon from making the tournament often goes well beyond more invested fans in office pools.

The repetition of school names on the ticker and social media — and maybe a stunning upset or two on national television like Florida Gulf Coast’s “Dunk City” Sweet 16 run in 2013 — has often led to increased interest among potential students and donors to dip into those deep pockets to spruce up athletic facilities or other buildings on campus.

“It’s the schools that aren’t in it every year that get the notoriety every time the teams that are in the tournament (are listed),” Spiker said. “Our name comes up there for the past week, whether it’s on ESPN, CBS, Fox Sports - people talk about it: ‘Drexel’s in.’ People start to look up Drexel.”

For all the expectations that a tournament berth and a week of exposure will do wonders for a program, the reality is most never sustain that success.

Saint Joseph’s was the talk of college basketball in 2003-04 when it opened the season with 27 straight wins, reached No. 1 in the AP poll and was a No. 1 seed in the NCAA Tournament for the first time. Coach Phil Martelli never found the next Jameer Nelson or Delonte West and was fired in 2019 with just one tournament win in three appearances over his final 15 seasons.

“We’ve got to continue to get the right pieces, the right people," said Kerns, the App State coach. "And I think that our staff has tried to research some programs that have been to the NCAA Tournament and then maybe haven’t capitalized on it in recruiting.”

The recruits the schools did find were talented enough this year to get unheralded teams to March.

The trick is doing it again.