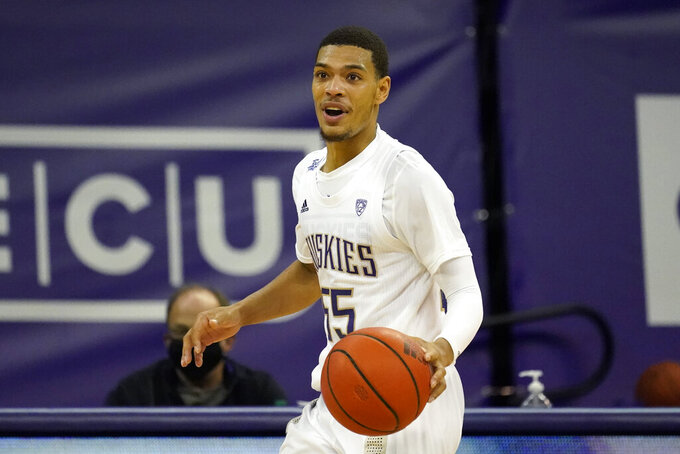 Washington's Quade Green brings the ball up against Oregon during the second half of an NCAA college basketball game Saturday, Dec. 12, 2020, in Seattle. (AP Photo/Elaine Thompson)

LJ Figueroa converted a three-point play to give Oregon a 15-point lead, its biggest of the game, with 16 minutes left.

Green scored Washington's first six points in an 8-2 run that trimmed its deficit to 69-68 with 1:40 to play but Williams hit an open 3-pointer from the left corner 24 seconds later. Battle converted a three-point play to make it 72-71 with 58 seconds remaining and the Huskies got a stop on the other end, but lost the ball out of bound and then fouled Chris Duarte who made 1 of 2 from the free-throw line and Washington called a timeout with 7.9 seconds left. Green missed a deep 3-point shot about four seconds later and Dante made 1-of-2 free throws to cap the scoring.

The Ducks rallied from a 16-point deficit in Seattle to beat Washington 64-61 in overtime on a last-second 3-pointer in the last meeting between the teams last January.

Oregon has won four in a row against the Huskies.