Duke heads to Madison Square Garden after return to No. 1 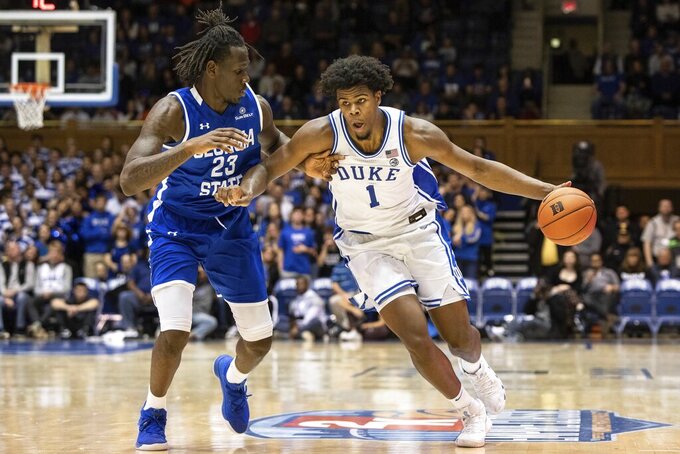 Duke found itself in a familiar position this week by reclaiming the top spot in The Associated Press men’s college basketball poll.

The Blue Devils earned the top spot for the 143rd week to extend their all-time record after previous No. 1 Kentucky lost to unranked Evansville.

Duke’s reign at the top will be put to the test in what could be two tough games this week at the 2K Empire Classic at Madison Square Garden.

First up for the Blue Devils is California in the semifinals on Thursday. The Bears (3-0) are trying to rebuild under first-year coach Mark Fox but already have wins over Pepperdine and UNLV so far.

Get past Cal and Duke could face a stiff test against No. 22 Texas on Friday. The Longhorns (4-0) have to beat Georgetown first, but they already have a win against then-No. 23 Purdue on their resume and are playing lockdown defense early in the season.

“Expect the same from this team: being extremely hungry still,” guard Tre Jones said after scoring a career-high 31 points in a victory over Georgia State. “No matter what happens to start off the week (in the poll), just extremely hungry, we’re going up there with one goal in mind, to come back with two wins and continue to grow on defense and offense.”

No. 7 Virginia has followed up last season’s national championship by turning up its already-stingy defense. The Cavaliers (3-0) held two of their first three opponents to 34 points — Syracuse was one — and is limiting teams to 25% shooting, 23% from 3-point range.

Virginia and its defense will get a big test Tuesday against Vermont.

The Catamounts are 4-0 for the first time since 1977-78 and have one of the nation’s best scorers in Anthony Lamb. Vermont also can play a little defense, holding teams to 34% shooting and 19% from the 3-point arc.

Even with Lamb on the court, this could be a low-scoring game in Charlottesville.

Virginia also plays UMass on Friday at the Hall of Fame Tip-Off Tournament in Uncasville, Connecticut, and will face Arizona State or St. John’s the following day.

No. 15 Utah State’s highest ranking since 1970-71 will be put to a big test in the Caribbean this weekend at the Mike’s Jamaica Classic.

The Aggies, who moved up two spots in this week’s AP Top 25, face LSU on Friday. The Tigers lost to Virginia Commonwealth last Wednesday but have a solid backcourt and one of the best freshmen in the country, 6-foot-9 Trendon Watford.

Watford against Utah State 7-footer Neemias Queta will be fun to watch. So will Aggies guard Sam Merrill, but that’s pretty much every game the dynamic senior plays.

Kentucky suffered the biggest upset of the early 2019-20 season, losing by three to Evansville at home last week. The loss sent the Wildcats careening down the AP Top 25, from No. 1 to No. 9.

Kentucky bounced back with an 82-74 win over Utah Valley on Monday night and will face Mount St. Mary’s on Friday during a stretch of five games against smaller-conference schools.

The Wildcats are expected to roll in those game, but they did lose to Evansville, so you never know.