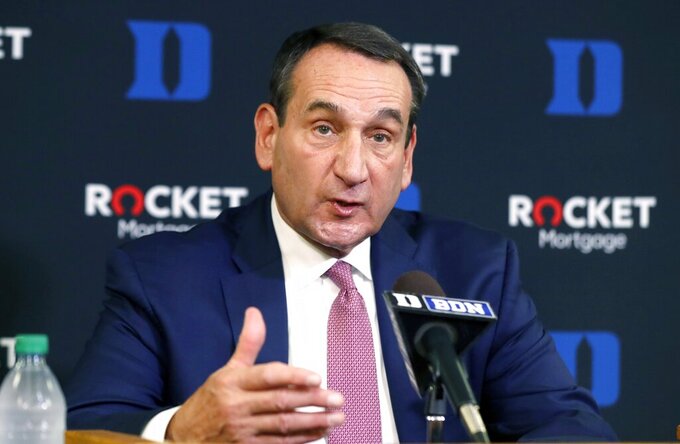 The Blue Devils' latest crop of freshmen is embracing what seems like a tough job — following Williamson and his star-studded class in Durham.

"We feel that we're a totally different team than last year," freshman Wendell Moore said Monday. "Yeah, they had the star power in the three or four guys who left, but we also have that same star power."

Turning the roster over is nothing new for the Blue Devils, who annually send one group of one-year players to the NBA only to bring in another collection right behind them. Seventeen of the program's 19 one-and-dones have passed through since 2011, including at least three in each of the last three seasons.

The current group faces a unique challenge — creating its own identity with the memories of Zionmania still so fresh.

"I don't think we think about it like that," Stanley said. "We just come in and bring our own thing. We're all different in our own right, and I think we don't look at each other like us freshmen, how we're going to do it. We're really (placing) importance on being inclusive with everyone. I think, as a team, it's more just what we are. As a team, we can be this. It's not just the freshmen following (Williamson). It's a team following it."

The good thing, coach Mike Krzyzewski said, is that the current team has its talent spread more evenly throughout the roster, with Moore, Carey and Matthew Hurt settling into big-man roles and Stanley in the backcourt. Team defense figures to be even more of a priority this season, Krzyzewski said.

Last season, Williamson and RJ Barrett might have been so much more skilled offensively than some teammates that it created an imbalance.

"There's not a Zion, and even an RJ. Those guys were just ahead of the game," said a relaxed Krzyzewski, speaking publicly for the first time since a school investigation found no evidence that Williamson received improper benefits.

"This group has both maturity and talent, along with talent and immaturity with the young guys, makes it a more balanced team," he added.

Krzyzewski had good reason to feel relaxed: His is one of the few programs that can replace such a talented crew of one-and-dones with a class this talented. According to Scout.com, Duke has the nation's third-best incoming freshman class, behind Memphis and Kentucky.

And for all the buzz that Williamson brought to the program, his team fell a step short of the Final Four — the second straight year Duke was knocked out in a regional final.

Because of its balance, and with Tre Jones back for a second season at point guard, the current group might have the potential to make an even deeper run.

That's not to say this team is completely lacking in sizzle, though.

Stanley made quite a statement last week when the school posted to Twitter a video of him breaking Williamson's 1-year-old program record for the vertical leap at testing. School officials did not specify how high either Stanley or Williamson jumped.

"I always knew I was athletic, but I guess you see Zion, and he is what he is," Stanley said. "He's just so great, and being able to have a record like that and be in the same conversation with him is a blessing."

A year ago, Williamson, Barrett and Cameron Reddish were the centerpieces of a group that seemed to be equal parts basketball team and cultural phenomenon.

They played a road game with Jay-Z in the stands. They received shout-outs from LeBron James and Stephen Curry at the NBA All-Star game. And only Williamson could blow out a shoe and have it turn into a national story — and maybe even cause Nike's stock price to dip.

Williamson won national player of the year honors while averaging 22.6 points and 8.9 rebounds, but the knee injury he suffered when his Paul George sneaker blew out cost him seven games. Duke wasn't the same team when he returned, falling to Michigan State a step shy of the program's first Final Four since 2015.

The three freshmen each went in the top 10 of the NBA draft, with Williamson going first overall to the New Orleans Pelicans. His old jersey number went to Carey, and the son of a former NFL offensive lineman said he feels no apprehension about following the face of college basketball in 2018-19.