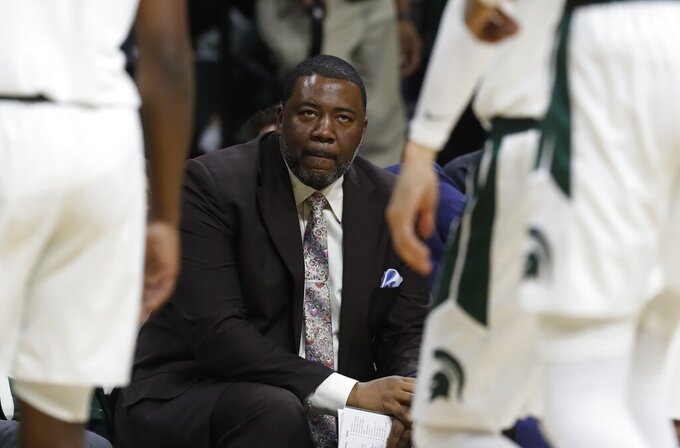 The school made the announcement Monday, adding the move was pending its board's approval.

Stephens is scheduled to have his first news conference as Broncos coach on Wednesday. The former Spartans forward was on Hall of Fame coach Tom Izzo's staff for 19 seasons, including the last decade as an associate head coach.

“Saying thanks to (Izzo) for what I’ve learned and for our friendship isn’t enough,” Stephen said. “I will carry all of those lessons with me to Western Michigan, which I think is a perfect place for me as a head coach. I consider myself a blue-collar coach, who is a grinder and I will work tirelessly to make Western Michigan one of the best in the Mid-American Conference and take the program to new heights.

Clayton Bates resigned as Western Michigan’s coach last month after winning eight games in his second season. The Broncos have made four NCAA Tournament appearances, most recently in 2014.

Stephens has coached in six Final Fours, including 2003 when he was an assistant for Tom Crean at Marquette, in 20 trips to the NCAA Tournament.

“Dwayne has been more than ready to run his own program for a long time, and I think Western Michigan is getting an All-Star," Izzo said in a release.

“He has the roots and the connections to recruit the basketball rich state of Michigan extremely well and be highly successful," Green said.

Stephens, who is from Ferndale, Michigan, was also an assistant at Oakland University after being a key player for Jud Heathcote and the Spartans from 1989 to 1993 and playing professionally in Europe for three seasons.

“From our earliest conversations, DJ rose to the top of an incredibly competitive candidate pool as the right choice to lead our men’s basketball program to excellence,” Western Michigan athletic director Dan Bartholomae said. “His reputation as one of the nation’s most elite recruiters and his experience in developing some of the world’s finest basketball athletes separated him as one of the country’s most outstanding basketball coaches."