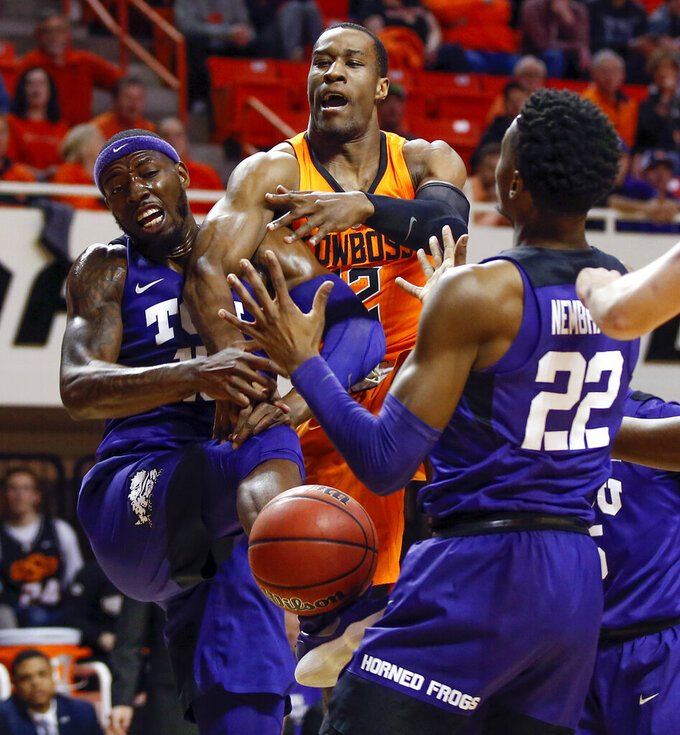 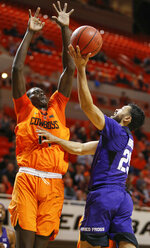 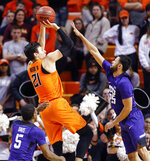 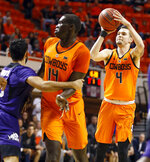 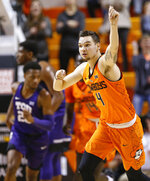 STILLWATER, Okla. (AP) — They weren't going to let this one slip away.

It had been 12 days since Oklahoma State squandered a seven-point lead with 5:28 remaining and lost 70-68 on a final-second shot at TCU on Feb. 6.

Thomas Dziagwa matched a career-high with 23 points, connecting on 6 of 11 3-pointers, to help lead Oklahoma State to a 68-61 victory over TCU Monday night, snapping a five-game losing streak.

"Any win in our league is a quality win, and I'm also happy that our kids were able to have a breakthrough in some ways in the outcome," said Cowboys coach Mike Boynton. "We've played really competitive basketball for the most part, but validating it with a win is always the icing on the cake."

"After going on a dry spell for a while and then knowing that we should have beat them at their place, it just shows that we have the tools to come out any said night and get the job done," Waters said. "There's a lot more confidence now."

After scoring just three points on 1-of-9 shooting (1 of 7 from 3-point range) in a 78-50 loss to No. 15 Texas Tech last Wednesday, Dziagwa has connected on 13 of 22 from beyond the arc and scored 46 total points over his last two outings, which represent the two highest-scoring games of his career.

Desmond Bane scored 19 points and had seven rebounds, while Alex Robinson contributed 19 points, five assists and four rebounds for TCU (17-9, 5-8), which lost its third in a row.

"Certainly we're disappointed; we've lost three close games and we're just not getting it done, on defense and offense," said TCU coach Jamie Dixon. "I think it really does start with defense. We dug a hole for ourselves but gave ourselves a chance to win down the stretch and couldn't get it done."

Oklahoma State had led by as much as 14 early in the second half, but TCU cut the advantage to 61-59 on Bane's 3-pointer with 2:40 remaining. Waters then connected on a fadeaway jump shot with 1:52 left and Isaac Likekele scored on a putback with 29 seconds to go to push the lead back to six and clinch the victory.

"Coach was saying that we couldn't hope for the win, we got to go out there and take it," Dziagwa said, "and the final few possessions, I feel like we played good defense and we earned this W."

TCU: After scoring 22, 16 and 14 points in his previous three contests, Davis had a difficult night, scoring six points on 2-of-12 shooting, and committing four turnovers, his second most this season. He had just two points, connecting on just 1 of 9 shots until there was 6:36 remaining, and got his third foul early in the second half, so he sat out for a long stretch after that. Meanwhile, Bane bounced back from only his second single-digit point total in his last 10 games to have a big night. After scoring just eight points, on 3-of-12 shooting, in the Frogs' 71-62 loss to Oklahoma on Saturday, Bane shot 8 of 15 in this one.

Oklahoma State: The Cowboys excelled early thanks to hot shooting from 3-point range, connecting on seven of their first nine attempts from beyond the arc over the first 10-plus minutes, as they built a 25-12 advantage. They were unable to keep up that pace, however, as they made just one of their next nine 3-point shots over the rest of the opening half. After going 3 of 7 in the second half, Oklahoma State wound up 11 of 25 (44.0 percent) on the night.

Oklahoma State won despite receiving just four points from leading scorer Cam McGriff, after he had five in a 69-57 loss to Texas on Saturday. Boynton praised his effort, though, as McGriff also contributed six rebounds, two assists, one steal and had a team-high +11 plus/minus rating in 31 minutes.

TCU: The Horned Frogs will be off until Saturday, when they face No. 23 Iowa State at home, a team they already defeated 92-83 on Feb. 9.

Oklahoma State: The Cowboys go on the road to take on Kansas State on Saturday, a squad they lost to, 75-57, on Feb. 2.