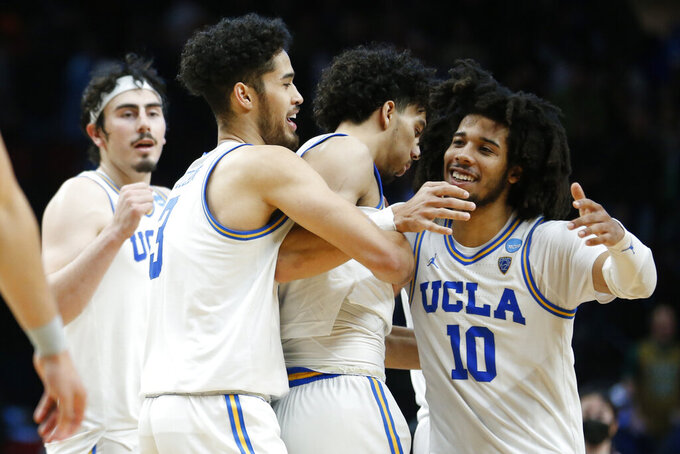 FORT WORTH, Texas (AP) — North Carolina and UCLA are tradition-rich programs with multiple national championships and are still playing in the East Regional, avoiding first-round shockers like what Saint Peter's did to second-seeded Kentucky.

In a blue-blood bracket that began with those three teams that have the most national titles, top-seeded Baylor — the defending national champ after winning its first trophy last season — also remains.

“I know it’s a really good bracket. But at the end of the day, we've got to win against the team in front of us in order to advance,” said Bears guard Adam Flagler, a second-team All-Big 12 pick. “That’s all we focused on.”

Playing less than 100 miles from its campus, the Bears (27-6) have their first-ever meeting against eighth-seeded and six-time national champ North Carolina (25-9) on Saturday. Both had lopsided victories in the first round.

“What’s so great about March, no matter what game you watch and no matter what who you probably picked in your bracket, you know it’s a one game, 40-minute event,” Baylor coach Scott Drew said.

This is Drew’s 19th season since taking over a decimated and scandal-plagued program. The Bears shared the Big 12 title this year with Kansas, another school with multiple national titles, after winning the conference for the first time last year on way to the national championship.

After Baylor-North Carolina tips off the second round at Dickies Arena, Midwest Regional top seed and three-time national champ Kansas (29-6) plays ninth-seeded Creighton (23-11) on the same court. The Bluejays are trying to get to the Sweet 16 for the second year in a row.

There is still a team from Kentucky playing in the East Regional: blue-collar Murray State (31-2), which has a 21-game winning streak after the seventh-seeded Racers beat San Francisco in the first round.

The 15th-seeded Saint Peter's Peacocks (20-11) upended the possibility of Murray State and Kentucky playing for the first time despite being separated by just more than 250 miles when they beat the eight-time national champion Wildcats 85-79 in overtime.

When Baylor was on way to winning its first national title last year inside the Indianapolis bubble, North Carolina was a first-round loser in the final game for retiring coach Roy Williams. That 85-62 loss to Wisconsin was the only time in Williams' 30 NCAA appearances that his team didn't get past the first round.

The Tar Heels are playing their fourth NCAA game as a No. 8 seed against a top seed. They lost the last such meeting against Kansas in 2013, but beat Stanford in 2000 on the way to the Final Four and Oklahoma in 1990 when first-year UNC coach Hubert Davis was playing for the Heels.

Sophomore Caleb Love said Davis, who was an assistant for Williams for nine seasons, hadn't mentioned that game in preparations. RJ Davis interjected: “Coach Williams did last year, though."

“He was just telling us that it’s been done before," All-ACC post Armando Bacot said, “and it’s something that can happen.”

North Carolina's 95-63 victory in the opener over Marquette was the most lopsided 8-9 game in NCAA Tournament history. Davis said he was happy for the players and that his first tourney victory as a head coach wasn't personal validation.

“I look at this job as missionary work. I’ve been given an opportunity to be the head coach for this program and be a part of this program for the last 10 years, and having a chance to play here,” Davis said. “Every day I get a front-row seat to be able to help out these kids. And it puts me in a place of humbleness and thankfulness and appreciation to be a part of their lives. ... This is 100% absolutely nothing about me.”

After watching the in-state Wildcats fall while waiting for its turn on the court in Indianapolis, Murray State also needed overtime to beat San Francisco.

The Racers will look to avoid a similar fate against Saint Peter’s when trying to reach the Sweet 16 for the first time in school history. But they are not discussing what could be.

“It pops up on social media but Coach Matt (McMahon) tells us to focus on the next thing,” guard Tevin Brown said, “and that’s winning tomorrow night and not worry about the games ahead.”

Saint Mary's coach Randy Bennett is known for bringing in Australian players — the most famous being NBA veteran Patty Mills, who played for Saint Mary’s from 2007-09.

These current Gaels have eight foreign players on their roster. That includes two Aussies, a pair of players from New Zealand and another two from Estonia.

“I think it helps when you get guys like that from different countries, that have different styles, to influence this team. Obviously international ball is sort of play slow, move the ball, extra pass,” said Gaels starting guard Alex Ducas, who is from Geraldton, Australia. “I think that really helps our team.”

Because of that Australia pipeline, Ducas said some of the Gaels games were on TV when he was growing up, which made him more familiar with the tiny school in Moraga, California, than second-round opponent UCLA.

“I knew about who Saint Mary’s were, I knew who Gonzaga were because of the rivalry," he said.

North Carolina forward Brady Manek, the grad transfer from Big 12 school Oklahoma, has played in seven games against Baylor. He has a bit of a different look while sporting a long beard with the Tar Heels.

“He can grow that beard to try to hide, but we know who he is,” Drew said. “He can really shoot it. And I’ve always respected his game and what he brings to the table.”

Manek had 28 points in the first-round win, but the Oklahoma kid had already been embraced by Tar Heels fans this season.

“Yeah, it’s special. It’s very different than what I’ve been used to,” Manek said. “Knowing that when I came in I only had one year, but just being accepted by everybody and just having an awesome year, it’s been unbelievable.”